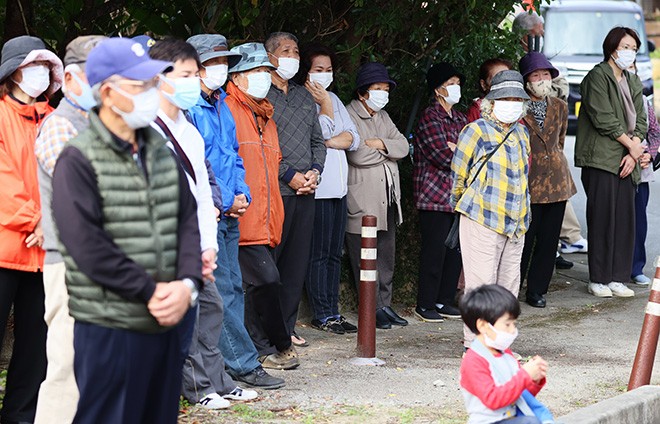 Nago voters listen to a speech by a candidate in the mayoral election. (Jun Kaneko)

The two candidates in the Nago mayoral election are locked in a close race while voter opposition to a U.S. military base project in the city has declined, a survey showed.

The telephone survey was jointly conducted by The Asahi Shimbun and Ryukyu Asahi Broadcasting Corp. on Jan. 16, when official campaigning started, and Jan. 17. Valid responses were received from 474 residents.

The main topic of the Jan. 23 election revolves around the move to relocate the U.S. Marine Corps Air Station Futenma from Ginowan in Okinawa Prefecture to an offshore site in the Henoko district of Nago.

Incumbent Taketoyo Toguchi, 60, has remained mum on the Henoko move but is backed by the ruling coalition, which has been pushing ahead with the project.

His challenger, Yohei Kishimoto, 49, a former Nago municipal assembly member, has clearly stated his opposition to the relocation project.

According to the survey, 90 percent of respondents who support the ruling Liberal Democratic Party said they would vote for Toguchi. A majority of supporters of junior coalition partner Komeito also said they backed Toguchi.

Toguchi received support from 60 percent of male respondents and had strong backing from those under 40.

Kishimoto had the backing of most of the respondents who support the four opposition parties that have endorsed his candidacy as well as about 60 percent of unaffiliated voters.

Close to 60 percent of female respondents favored Kishimoto, who also had the strong support of those 70 and older.

The survey found that 54 percent of respondents were opposed to the Henoko move, down from 63 percent in the 2018 mayoral race.

Support for the Henoko move was 24 percent, an increase from 20 percent four years ago.

Although Toguchi has remained silent about the base relocation issue, he is promoting economic programs funded by state subsidies provided to municipalities that cooperate in hosting U.S. military facilities.

Respondents were asked to choose what they thought was the most important of among four issues in the election.

The percentage of respondents who picked local economic promotion measures rose from 23 percent eight years ago and 39 percent four years ago.

In contrast, the percentage saying the Henoko base move was most important decreased from 56 percent eight years ago and 41 percent four years ago.