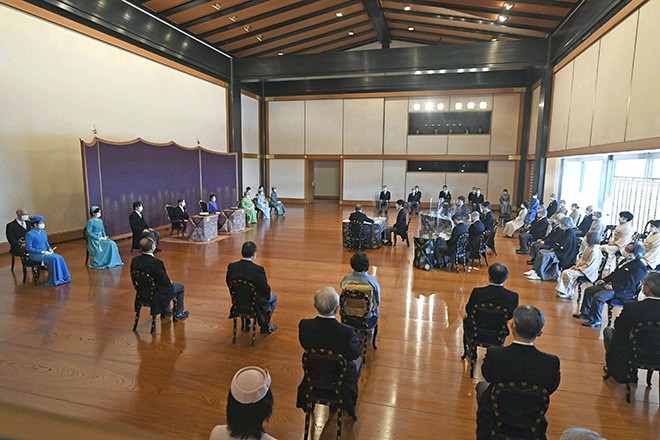 The New Year Poetry Reading ceremony is held with measures in place against the novel coronavirus on Jan. 18. (Pool)

Emperor Naruhito once again wished for an end to the COVID-19 pandemic in his poem for the annual New Year Poetry Reading at the Imperial Palace in Tokyo.

Also just like last year, all participants in the ceremony, held in the Matsu-no-Ma state room on Jan. 18, wore face masks, while the people reading out poems put on plastic face shields as a precaution against the novel coronavirus.

The ceremony features traditional “waka” poems written by imperial family members and 10 other composers selected from the public.

Members of the public submitted 13,830 poems for the event.

The theme of this year’s ceremony was “mado,” or window.

Naruhito’s poem read: “Sekai tono/ Ikikigatakaru/ Yo ha Tsuzuki/ Mado Hiraku Hi wo/ Hitoe ni Negau” (As our contacts with the world/ Remain difficult/ I earnestly hope for a day/ When the window opens to the world).

Naruhito composed his piece to include his prayers for bringing the public health crisis under control, as he did last year. In this year’s poem, he expressed hope that the day will come when people can freely travel across borders without being worried about becoming infected.

Empress Masako’s poem reflected the greenery seen from the Imperial Palace, where her family moved to from their former residence on the grounds of the Akasaka Estate in September.

Masako’s poem read: “Atarashiki/ Sumaito Nareru/ Fukiage no/ Mado kara Nozomu/ Taiju no Midori” (Looking through the windows/ Of the Fukiage Palace, our new residence/ We enjoy the greenery/ Of the great trees around us).

Crown Prince Fumihito’s poem was inspired by children going to school cheerfully despite the times when school activities were severely restricted due to the pandemic. He said he found relief seeing them from a university where he gives lectures every year.

Fumihito’s poem read: “Madogoshi ni/ Ko ra Kakemawaru/ Sugata wo Mi/ Kokoro Nagomite/ Kuru wo Tashikamu” (Through the window/ I see the children/ Running about/ And I sense a calmness/ Growing in my heart).

Princess Aiko, the only child of Naruhito and Masako, reached adulthood in December. Aiko skipped this year’s poetry reading to study for her university classes but submitted a poem to the ceremony for the first time.

Her poem reflected the feelings she had when she attended summer school at Eton College in Britain in 2018. A close aide to her said the experience must have been particularly memorable for her in her 20 years of life.

The Imperial Household Agency also announced that the theme for next year’s poetry reading will be “tomo,” or friend.