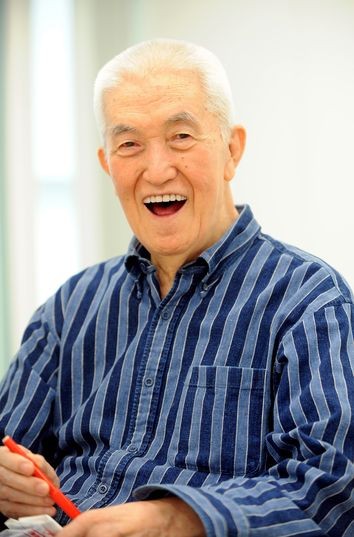 Back when actor Meiko Nakamura was a young woman who had just become engaged to be married, she found herself in a tough spot.

That was because Rokusuke Ei (1933-2016), one of her male friends, started weeping inconsolably when she told him of her upcoming marriage.

According to her book "Mo Ittokanaito" (I've got to say this now), she rang her father, an author, from a public payphone to seek his advice.

She repeated these exact words to Ei. And they must have left him with an indelible impression, she recalled, as they became the inspiration for the lyrics of the megahit number "Ue wo Muite Arukou," which was retitled "Sukiyaki" for its release overseas.

We humans have moments when someone else's words resonate with our entire being, especially in our adolescence.

Such moments can be seen in some of the winning entries in "Oriori no Kotoba Contest 2021," in which junior and senior high school students were invited by The Asahi Shimbun to send in comments made by others that inspired them deeply.

"Let's work together some day" was the message Azu Takahashi, a first-year senior high school student, got from her teacher when she was in junior high school.

Her teacher wrote the message in Takahashi's junior high school yearbook at the time of her graduation as the teacher knew that her dream was to become a schoolteacher.

Writing the message, her teacher told her, "I'm looking forward to meeting you when you are a teacher yourself." The teacher must have seen her as his prospective colleague, not a student.

Aoi Sano, a third-year junior high school student, had a classmate tell him, "Overwork yourself," rather than the more predictable "don't overwork yourself."

Sano had announced his candidacy for class representative and was just about to make his campaign speech, and his friend's tough-love encouragement really fired him up.

Hina Toyofuku, a first-year junior high school student, is a firm believer in Snoopy's famous maxim: "You play with the cards you're dealt."

She says she reminds herself of this when she feels discouraged, because envying or resenting someone who's more fortunate won't help you move on.

Walk with your head held up, looking at the sky. Indeed.