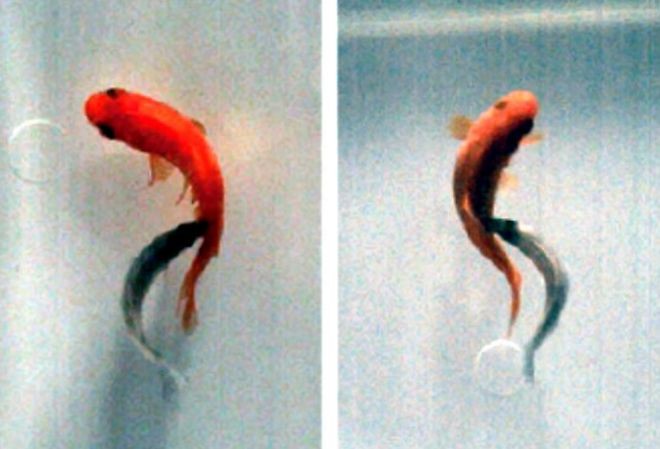 Images show how scale-eating fish prey on the red fish to consume their scales: left-favored one, shown left, makes an attack from left, while its right-preferred counterpart comes from the right. (Provided by Yuichi Takeuchi, an assistant professor at the University of Toyama)

Just like children developing a dominant hand, young fish also may choose a preferred side, although that preference must be determined early on, researchers have discovered.

A team of scientists primarily from Nagoya University and the University of Toyama confirmed that mature fish failed to obtain laterality through an experiment based on a freshwater variant native to East Africa.

“Experiences in childhood appear crucial for laterality development,” said Yuichi Takeuchi, an assistant professor of behavioral ecology at the University of Toyama, who was part of the team.

Many creatures are prone to use their body parts on certain sides more often to improve their precision and other performance factors as humans wield pencils and chopsticks with their dominant hands.

Which side should be relied on is affected by the animals’ innate bone structure and other body features.

Laterality is thought to be determined at specific points in life by not only genetic factors but also learning experiences after birth.

However, when laterality is actually decided was long shrouded in mystery for such reasons as the difficulty in continuing to observe subjects for prolonged periods.

Tackling the challenge, the research team chose a scale-eating fish species living in Lake Tanganyika in East Africa for its test.

The species approaches prey from behind from either side of the target to rip out scales for consumption. Each fish from the variant is known to attack from a certain side.

Fish in the species were divided into two groups based on which mandible was larger after birth, the right or left side.

Previous research shows the species snatches scales from both sides in its first-ever hunt, but that experienced fish with well-grown mandibles on the right come to prefer the right side. The same applies to left-jawed fish.

As whether that kind of laterality can be obtained in any growth stage was unknown, the scientists hatched and raised the fish only with given feed, so that those 4 months old, 8-month young fish and 12-month adults were then allowed to catch food on their own for the first time to observe their behavioral patterns.

About 10 fish from each age category were put in the same tank as prey with every fish given a single target. The findings revealed all the groups initially attacked their prey from both right and left randomly.

Following many rounds of hunts, the youngest fish began swimming toward prey from the same direction as their larger-side mandible. In the end, 80 percent of them developed their own laterality.

The middle group succeeded in determining their preferred sides among 50 percent of the fish in the category. But no adult fish could develop laterality, and they made attacks from random directions even after repeated rounds of experiments.

In addition, the results showed growth stages impact how good hunters the fish can become: the time before attacks start after being placed in tanks was eventually reduced to one-fifth that in the initial attempt among the first and second youngest groups with successful hunt ratios increased, whereas no improvements in the time and catch rates were reported in their adult counterparts.

“Adult fish could not achieve better results in their performance despite the repeated opportunities given to learn,” said Takeuchi.

“We will work to make clear the association between laterality obtainment and brain development,” Takeuchi said.