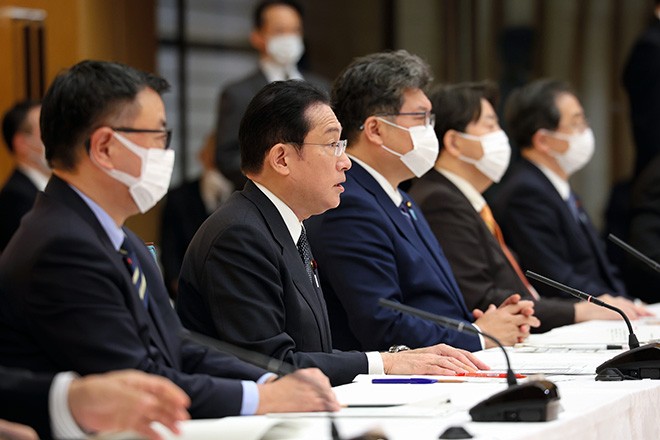 Prime Minister Fumio Kishida instructed his Cabinet on Jan. 18 to draw up a new clean energy strategy for the country that will lay out the government’s vision to achieve a carbon-neutral society.

Kishida intends to promote the development of nuclear technology, not just renewable energy through the strategy, which he hopes to make a key element of his flagship policy platform, which he is calling “new capitalism.”

“Climate change is an issue where negative aspects of capitalism, including a lack of sustainability, are concentrated,” Kishida said in a meeting with experts held in the prime minister’s office the same day, and told them he would like to share with them the overall picture of changes occurring in this field.

Kishida added that he intends to at least double investment in this area.

Japan is aiming to reach net-zero carbon emissions by 2050, but that target will heap extra burden on businesses that use a lot of fossil fuel, for example, by requiring them to overhaul their operations.

The government is aiming to create an environment where companies are more willing to invest in decarbonization by implementing a strategy that charts a path to achieving a carbon-neutral society, officials said.

It is seeking to have the plan balance both economic growth and sustainability, and, according to the Ministry of Economy, Trade and Industry, nuclear power is one of the key issues to move toward its goal.

Ministry officials said the government intends to promote research on next-generation nuclear technology, including small modular reactors (SMR), which is technology that has been readily developed in the United States with contributions from Japanese makers, as well as nuclear fusion.

Other issues the government considers as important include beefing up power grids to enable the transmission of huge amounts of renewable energy, making use of hydrogen and ammonia as zero-emission energy sources, and changing people’s lifestyles and consumption habits.

The ministry aims to prepare the new strategy by June and draw on assistance from other relevant ministries.

The development of the new strategy comes as nuclear power plants are undergoing a renaissance in Europe as governments around the world look for ways to decarbonize.

The French government announced in November last year that it would resume building nuclear power plants, and the European Commission, which is the administrative body of the European Union, announced this month it will regard both nuclear power and natural gas as energy sources that can help decarbonization efforts.

Nuclear power proponents in Japan are hoping the country will soon follow suit.

Kazuhiro Ikebe, chairman of the Federation of Electric Power Companies of Japan, appeared optimistic about the trend at a news conference on Jan. 14. He said Europeans are making a very practical move in returning to nuclear power.

“(The development in Europe) will impact non-EU countries, too. That includes Japan.”

The Kishida administration aims to leverage nuclear power stations to produce enough energy for the country and achieve decarbonization at the same time.

It wants the new clean energy strategy to be a means to use nuclear power plants for the medium to long term, according to officials.

Yet to do so, the administration needs to make crucial decisions on building new nuclear power plants or upgrading the old ones, thorny political issues that the previous Abe and Suga administrations had shelved.

However, multiple government sources said the new strategy will refrain from including any topics that could become divisive in the Upper House election this summer.

“We are still not at a stage where we can discuss building new nuclear power plants,” Environment Minister Tsuyoshi Yamaguchi told a news conference on Jan. 18.