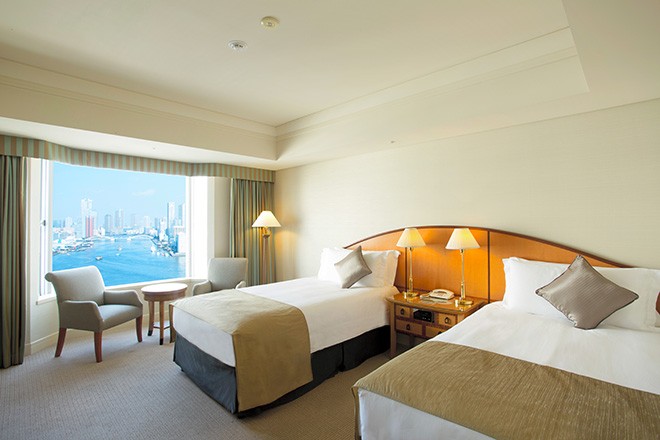 Minato Ward residents in Tokyo needing some time off close to home and hotels in the ward that have struggled during the COVID-19 pandemic can sleep better through a Minato Ward program.

The ward has launched a special program to let residents and workers in the ward stay at a reduced rate at local hotels that have suffered during the pandemic and subsidize the difference.

The ward office has named 10 hotels that are located in the ward for the program, which include the InterContinental Tokyo Bay, the Sheraton Miyako Hotel Tokyo and the Grand Hyatt Tokyo.

Under the program, ward residents can stay at these hotels from 5,000 yen ($44) to 10,350 yen per night, although the rooms typically run tens of thousands of yen.

The ward has reserved two rooms at each hotel and begun inviting residents to make a reservation.

A resident can use the program only once and stay up to two consecutive nights. A reservation must be made by a party of two or three.

The ward aims through the program to provide a recreational opportunity for residents who have been under stress during the pandemic and often told not to travel to prevent infections from spreading.

It also seeks to financially assist hotels that have struggled with depressed sales and earnings due to the pandemic.

The operating cost of the program is about 34 million yen. It was officially launched on Jan. 8 and will continue until March.

A total of about 4,600 people will be able to utilize the program, the ward office said.

For reservations for February, a lottery was instituted since the number of people who wanted to use the program to stay at these hotels exceeded the availability of rooms. The winning rate among applicants was 2.66, the officials said.

The ward owns a recreational facility in Hakone, Kanagawa Prefecture, for residents to stay at a cost of about 10,000 yen per person to promote their good health.

It also charters multiple accommodation facilities in the Kanto region.

“We have discussed how to provide recreational opportunities during the times when it is difficult for (residents) to travel outside Tokyo,” said an official of the ward office.

The program “will help contribute to the local economy” and support these hotels that have lost bookings amid the pandemic, the official said.

Ryosuke Nakamura, who heads the sales and marketing department of the InterContinental Tokyo Bay, said the program “will revitalize the communities and generate publicity.”

Nakamura added, “More than anything else, we are grateful for the subsidies.”

He said the hotel’s room occupancy rate used to be close to 90 percent before the pandemic. But it has been about a third since the waves of infections started.

He said he does not expect foreign visitors to return this year and the hotel has shifted its focus to people in the local community.

He hopes the program offers an opportunity for residents to “learn about the joy of spending time at the hotel.”

But Toshiyuki Kanai, a professor of urban government administration at the University of Tokyo, said public subsidies for the program would be better spent elsewhere.

“Taxpayers’ money needs to be spent only on projects that are absolutely essential to ward residents and that are not fully provided in a market-oriented economy,” he said.

“There are things that the ward office should make a strong effort in, such as education, health care and social welfare, rather than subsidizing people who can afford to pay from 5,000 yen to 10,000 yen.”