VOX POPULI: Winter has more chilly weather in store for us yet 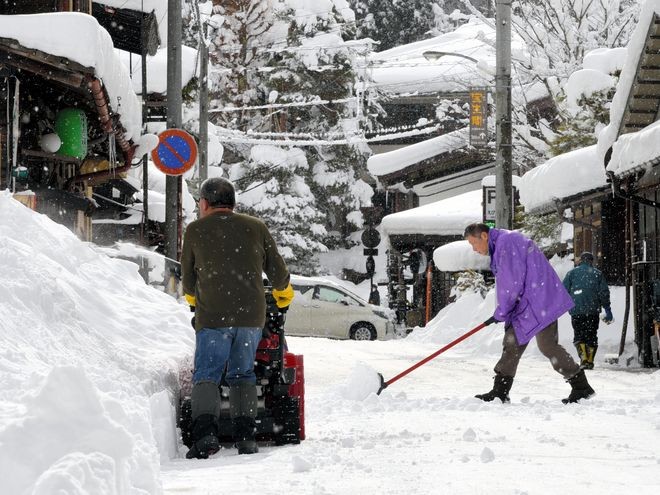 There are Japanese onomatopoeia galore for rain. They include "zaa zaa," "shito shito" and "pichi pichi," just to cite a few.

But with snow, it's an altogether different story. Snow makes no sound. Or rather, it absorbs sound, and "shin shin" is about the closest thing to an onomatopoeia for that.

This year, I understand that Japan is getting heavier snowfall than usual. The Asahi Shimbun's Hokkaido edition recently reported that wet, heavy snow is giving the city of Sapporo an especially hard time.

In this northern city where the fallen snow has not melted, the snow not only needs to be shoveled, but also must be removed afterward by dump trucks. But because this winter's snow is heavy, shoveling is proving to be more arduous than usual, hampering snow removal operators from getting around to the task.

It appears that piles of plowed snow have formed roadside snowbanks and are disrupting traffic.

Jan. 20 is "Daikan" (the coldest day of winter) according to the traditional Japanese calendar, and snow is forecast in many parts of the nation. I hope everyone will be extra careful when shoveling snow or driving their car.

Poet Kotaro Takamura (1883-1956) lived alone at one time in a mountain lodge in Iwate Prefecture, where he described a day in winter in a piece titled "Yuki Shiroku Tsumeri" (Snow piles white).

It goes to this effect: "A forest trail is buried under flat snow/ I step on it knee-deep, and then even deeper/ Bathed in pale sunlight/ The snow is phosphorescent."

The poem, which captures the beauty and severity of snow, was a result of Takamura's life of rigorous self-retrospection.

With COVID-19 cases surging for what is already the sixth time, people will likely be spending longer hours locked up in their homes, regardless of the amount of snow they get.

According to a Japanese dictionary at hand, the "shin" in the onomatopoeia "shin shin" can be written in either of these two kanji characters: one denoting "deep," or the other that means "to sink."

Applied to something other than snow, "shin shin" can perhaps be used to describe a deepening chill.

Looking at a weather map that screams winter, I am bracing myself for a cold spell.