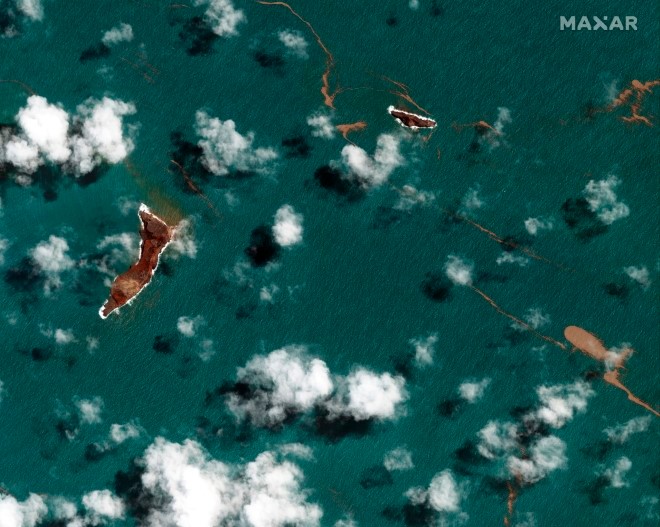 SYDNEY--Three of Tonga’s smaller islands suffered serious damage from tsunami waves, officials and the Red Cross said Wednesday, as a wider picture begins to emerge of the destruction caused by the eruption of an undersea volcano near the Pacific archipelago nation.

Communications have been down throughout Tonga since the eruption on Saturday, but a ship made it to the outlying islands of Nomuka, Mango and Fonoifua on Wednesday, and reported back that few homes remain standing after settlements were hit with 15-meter (49 feet) -high waves, said Katie Greenwood, the head of delegation in the Pacific for the International Federation of Red Cross and Red Crescent Societies, which had two people aboard the vessel to help assess the damage.

“Very unfortunate information has come to light overnight about the three islands that we were really worried about — that they have all suffered devastating consequences as an effect of these incoming waves,” she told The Associated Press in an interview from Fiji. “Most of the structures and dwellings on those islands have been completely destroyed.”

It is not clear yet what assistance Tonga needs or wants from the international community, and complicating matters is the country’s concern over the possible spread of COVID-19, which it has effectively kept outside its borders except for one case reported in a traveler from New Zealand in October.

Tonga is hoping for “almost contactless disaster relief” as a precaution, Greenwood said, acknowledging that this would complicate efforts but is also understandable amid the pandemic.

“They really don’t want to exchange one disaster for another,” she said.

Some 60 percent of Tonga’s 106,000 people have already received two doses of a COVID vaccine, and nearly 70 percent have received at least one dose, according to Our World in Data.

In anticipation of the country’s needs, New Zealand has already sent two ships. One is carrying 250,000 liters of water and a desalination plant with the capacity to produce 70,000 more liters per day, and another is bringing a survey and diving team to help assess the damage to shipping channels, ports and wharf infrastructure.

They’re expected to take three to four days to arrive, though one estimate was that they could be there as early as Friday, said Peeni Henare, New Zealand’s defense minister.

“We don’t know what the shipping lanes look like, and so we want to, of course, proceed with a bit of caution as we get closer to the Tongan islands,” he said.

New Zealand Foreign Minister Nanaia Mahuta said the teams en route would also be available to help if needed with the evacuation of the approximately 150 people who live on the devastated outlying islands.

“We stand ready to assist where it is useful to the government of Tonga, and where they are satisfied with COVID protocols,” she said.

Australia is also preparing to send aid by air and ship, and Prime Minister Scott Morrison said he expected to talk with his counterpart in Tonga later Wednesday to better understand what is needed.

“Our defense forces have stood up their operation and are deploying as necessary and directed,” he said. “So we feel deeply for our family in Tonga.”

The volcano coated the main island with a 2-centimeter layer of ash, which has rendered the 2.6-kilometer runway at Fua’amotu International Airport unusable.

Volunteers have been working to sweep ash away to clear a path for aid planes to land, and there was hope it may be ready as early as Thursday.

Mahuta said the runway was not thought to be damaged beneath the ash, but that they would not know for sure until it was all cleared.

A New Zealand reconnaissance aircraft has already flown over the impacted islands and provided the data to Tonga’s government.

Communications have been severely restricted because the single underwater fiber-optic cable that connects Tonga to the rest of the world was likely severed in the eruption. The company that owns the cable said the repairs could take weeks.

Satellite images captured the spectacular eruption of the Hunga Tonga Hunga Ha’apai volcano, with a plume of ash, steam and gas rising like a giant mushroom above the South Pacific. The volcano is located about 64 kilometers north of Tonga’s capital, Nuku’alofa.

The heavy amount of ash in the air has also meant that satellite communications have been sporadic but they are improving, Greenwood said.

So far, it seems the country has avoided the widespread devastation that many initially feared.

The government said Tuesday it has confirmed three deaths--two local residents and a British woman--though it has cautioned the toll is expected to rise as more reports come in from outlying areas.

On Tonga’s main island of Tongatapu, perhaps the biggest problem is the ash that has transformed it into a gray moonscape, contaminating the rainwater that people normally rely on to drink.

Greenwood said people had been warned in advance to protect their water supplies, and that clean drinking water remained the top need.

“Water is definitely, 100 percent, the top priority at this point in time, along with shelter needs,” she said.

Meantime, Tonga’s Red Cross, which has about 20 people and 100 trained volunteers, is already distributing shelter kits and other supplies, she said.

In Sydney, the deputy president of the Tonga Australia Chamber of Commerce, Koniseti Liutai, said his organization was facilitating free shipping containers for members of the local Tongan community to send aid to their relatives back home.

In particular, he said they were trying to address specific needs they had identified, those of the elderly or disabled.

“We know that the government of Tonga and Australia and New Zealand and others are addressing food and water,” he said. “We’re trying to be a little bit more specified for family requirements.”