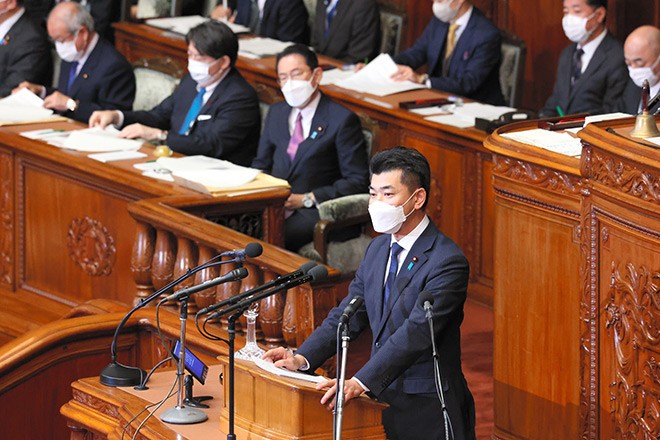 The Diet debate on Jan. 19 took on a familiar tone: a prime minister sticking to the same scripted responses and an opposition leader complaining about past scandals involving the Liberal Democratic Party.

Prime Minister Fumio Kishida took questions in the Diet for the first time since he gave his policy speech on Jan. 17.

Kenta Izumi, the head of Constitutional Democratic Party of Japan, had pledged to make his party known for proposing policy measures instead of just whining about what the government was doing or failing to do.

In the Diet on Jan. 19, he brought up a scandal from the Shinzo Abe administration, asking Kishida to get to the bottom of the falsifications of documents related to the questionable sale of state-owned land to the Moritomo Gakuen educational institution.

Izumi also asked Kishida about the rejection by his predecessor, Yoshihide Suga, of six scholars nominated by the Science Council of Japan.

Kishida repeated that those issues had already been settled.

During the extraordinary Diet session in December, The Asahi Shimbun broke a story about inflated economic statistics ordered by the infrastructure ministry. Some CDP members became disgruntled because the party did not pursue the issue in much depth and was seen as not fulfilling its role of keeping an eye on government.

Izumi did bring up policy proposals in the Diet debate.

Touching upon Kishida’s pet project of establishing a “new capitalism,” Izumi said: “The contents are still very unclear, and you have only rehashed old measures. What difference exists between what you want to do and Abenomics?”

Kishida did not spell out what his new capitalism entails.

After pointing out that Kishida also said nothing specific about his economic redistribution policy, Izumi proposed three areas of redistribution in terms of income, more funds for rural regions, education and measures to deal with the falling birthrate.

Izumi ended his questioning by stressing that the CDP would continue to propose policy measures while pointing out areas where the government should correct its policy.

During last autumn’s Lower House election, the LDP pledged to strengthen the command function of the prime minister’s office in dealing with the COVID-19 pandemic.

Izumi said the plan to strengthen that function by June was too “slow.”

But Kishida said that amount of time was needed to objectively assess how the health crisis has been handled until now and to consider what changes are needed.

Kishida also brushed aside the CDP proposal to revise the Japan-U.S. Status of Forces Agreement, which has been criticized as allowing Omicron-infected U.S. military personnel to enter Japan without going through the government’s usual anti-virus measures.

(This article was written by Kazutaka Kamizawa, Taro Kotegawa and Yoshitaka Isobe.)