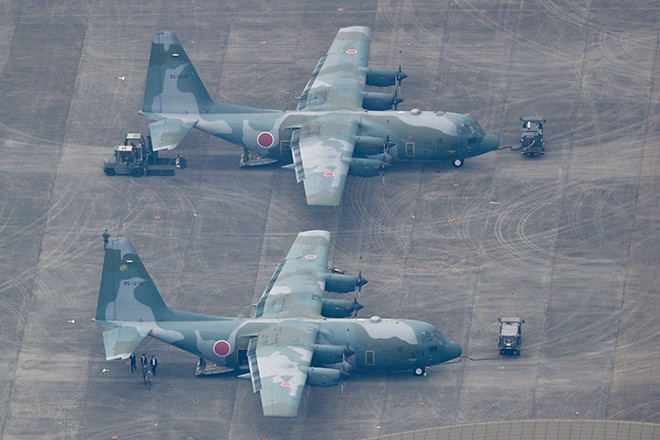 Two Air Self-Defense Force C-130 transport aircraft loaded up with relief supplies were due to depart later Jan. 20 for Australia to aid far-flung disaster-hit Tonga in the South Pacific.

The aircraft are being dispatched after a massive eruption of an underwater volcano. The extent of the disaster remains murky because Tonga is so remote and communications remain disrupted.

Japan is providing safe drinking water as well as gear and machinery to remove volcanic ash. The assistance is being provided through the Japan International Cooperation Agency (JICA).

Defense Minister Nobuo Kishi announced Jan. 20 that the transport aircraft and a vessel carrying water and other items could leave as early as later in the day.

The Maritime SDF transport vessel Osumi will carry heavy duty equipment such as a high-pressure washing machine and a CH-47 helicopter used by the Ground SDF.

Officials said 300 or so SDF personnel were joining the mission.

Prime Minister Fumio Kishida said during Diet questioning in the Upper House on Jan. 20 that the government “will closely work in partnership with related countries such as Australia and New Zealand” to assist Tonga.