Gas prices inch toward 170-yen level that would trigger subsidy 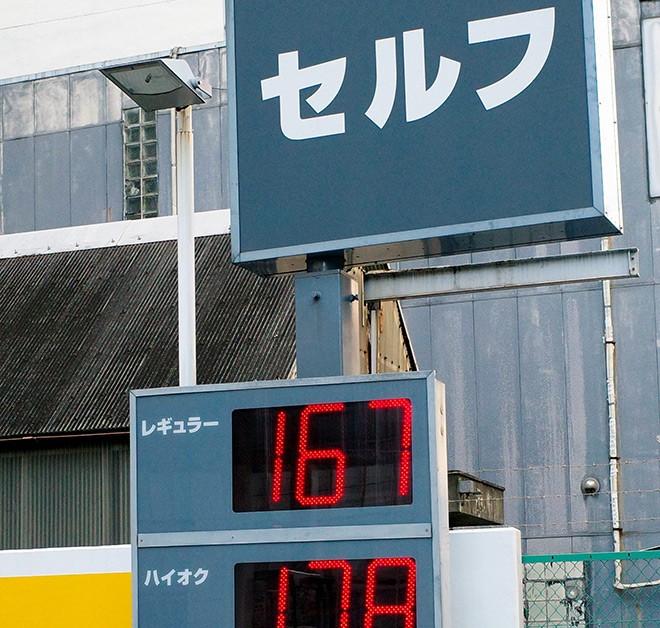 The average retail price of a liter of gasoline across the nation rose to 168.4 yen ($1.50) as of Jan. 17, approaching the figure that triggers a government price subsidy.

That announcement was made by the Oil Information Center (OIC) of the Institute of Energy Economics, Japan on Jan. 19.

The latest figure represents a 1.9-yen increase over the previous week and puts the price at the pumps within arm’s reach of the 170-yen level at which the subsidy program will kick in.

If gasoline prices do hit 170 yen, it would mark the highest gas price in Japan in 13 years.

Kerosene prices also rose for the second straight week to 1,958 yen per 18 liters, an increase of 24 yen.

According to OIC officials, petroleum companies plan to raise their wholesale prices by about 2 yen per liter on or after Jan. 20.

Once retail gas prices hit the 170-yen point, a subsidy of as much as 5 yen per liter will be distributed to petroleum companies and trading companies that handle oil.

The aim is to use taxpayer money to restrain retail prices from increasing further.

The move was implemented after the U.S. government asked China and Japan late last year to join in a cooperative effort to release crude oil stockpiles to lower energy prices.

If the price exceeds 170 yen on Jan. 26, the date of the next average price announcement, the economy ministry will immediately disclose the unit price of the subsidy that will also cover kerosene, heavy fuel oil and light fuel oil.

Petroleum companies have indicated they will reflect the subsidy amount in lower wholesale prices. But it remains to be seen if the measure will sufficiently restrain retail prices.

While some argue that taxpayer money should be used to rein in gas prices, others point out that the prices of other products have also increased because of the higher petroleum costs and that it would be unfair to only provide subsidies for gasoline and other fuel.