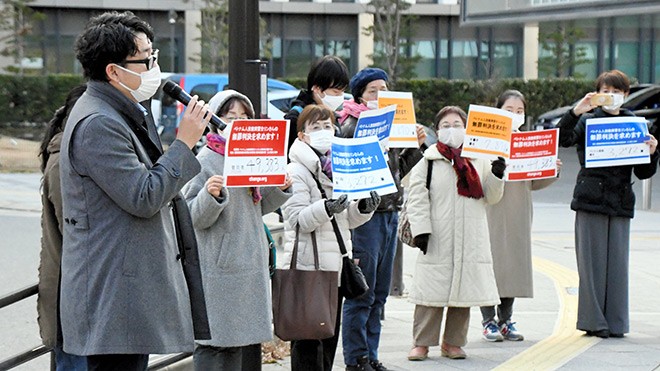 A rally held in support of technical intern trainee Le Thi Thuy Linh by her team of attorneys before her trial in Fukuoka on Jan. 19 (Yoshiki Yashiro)

Le Thi Thuy Linh, 22, has been accused of abandoning the bodies of her two baby boys who died at birth at her home in Ashikita, Kumamoto Prefecture.

In the high court ruling, the presiding judge overturned a lower court decision that had sentenced her to eight months in prison, suspended for three years.

The defendant maintains her innocence and plans to appeal to the top court.

According to the high court ruling, around Nov. 15, 2020, Linh put the babies’ bodies into a cardboard box and sealed it with duct tape. After that, she kept the box on a shelf in her room.

The court ruling said Linh had abandoned the bodies for about 33 hours and that “it could be possible for the normal funeral (preparation) to take this long.”

The high court stated, “It can’t be said that she went beyond the time limit when she should fulfill her obligation to hold a funeral.”

The lower court decision said if it was time taken for funeral preparation, it was longer than needed. But the higher court annulled the past decision, citing a mistake in an application of the law.

The high court said she “felt sad and apologetic about the deaths of her babies” because she had delicately wrapped the corpses with a towel and kept them inside the box.

On the other hand, it said she was guilty of disposing of the bodies because “she had a will to hide (them) and took actions to make it difficult for others to find (them).”

“She had enough opportunities to consult others,” the high court said in handing down its sentence. “She feared that her pregnancy would make her unable to do her job training and pay her rent, which would force her to be deported to her homeland.

“What she did to conceal her pregnancy and delivery has some room for leniency. It is reasonable to give a sentence near the lower limit with a suspension.”

After the high court ruling, Linh held a news conference in Fukuoka and gave her comments in Japanese.

“It is truly regrettable that the court did not accept my claim of innocence. I am not convinced with this ruling,” she said.

She explained throughout the trial that she did not talk about her pregnancy with others because “she feared she would be deported to her country.”

She said that after she became pregnant, she saw a posting on a social networking service site for Vietnamese users saying that intern trainees are urged to return to their home country after pregnancy, according to her attorneys.

“The court did not see the harsh realities that a technical intern trainee faces,” her attorney said of the high court ruling. “Amid the fear that she could be deported to her country if someone found out about her pregnancy, she did what she could do (at her worst time).”

(This article was written by Kazuki Nunota, Yoshiki Yashiro and Ryutaro Ito.)