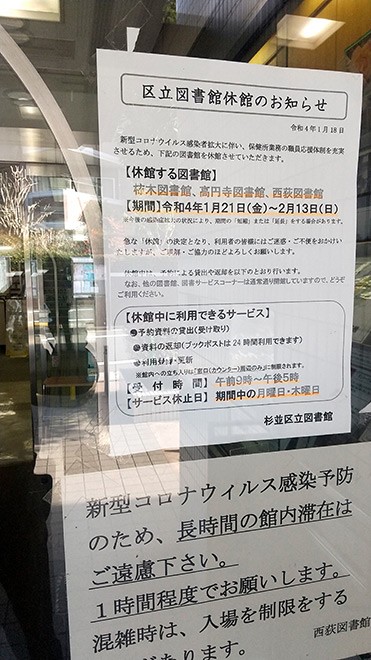 A sign in front of the municipal library in the Nishiogi district of Tokyo’s Suginami Ward says on Jan. 19 it will temporarily close. (Keiichiro Inoue)

Tokyo’s Suginami Ward has decided to temporarily close some of its facilities to secure enough personnel at its public health center amid fears that it has entered the sixth wave of infections.

“We decided to act early because we failed to secure enough personnel during the peak of the fifth wave of infections last summer and the Omicron variant is highly transmissible,” said Sumiyoshi Inoue, who heads the ward’s crisis management division.

The ward government on Jan. 18 announced that it will shut down three ward-run libraries and the municipal Suginami Historical Museum from Jan. 21 through Feb. 13 based on its business continuity plan to deal with a spike in COVID-19 cases.

The ward set a target of securing 60 personnel to support the operations of the public health center if its daily average of new infections tops 300 over the most recent week.

Although the average had stood at 200 as of Jan. 18, the ward government says it is aiming to increase the number of staffers to the target level.

The ward government had already outsourced the task of checking the status of COVID-19 patients recuperating at home twice a day over the phone or by other means. Currently 80 staff members are assigned to the task.

Suginami Ward initially drew up the business continuity plan in 2010 to set a priority on its operations under a scenario that many ward officials had contracted a new type of flu. It revised the plan in October 2020 to respond to a possible outbreak of the novel coronavirus.

The ward said it plans to consider further increasing the number of public health center staff if the daily average of new COVID-19 cases exceeds 400.