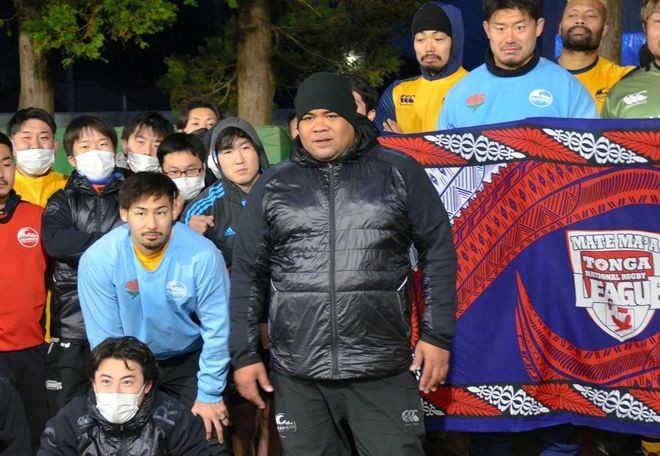 KAMAISHI, Iwate Prefecture—Tuvi Mahe was so busy preparing for the Kamaishi Seawaves’ season opener that he may have been the last person on the rugby team to learn about a disaster that hit his home country.

“Is Tonga all right?” players asked Mahe, 41, a staff member and interpreter for the team based in this coastal city in Iwate Prefecture.

A massive underwater volcanic eruption and tsunami struck Tonga on Jan. 15 while Mahe was making travel arrangements and interpreting for Japanese and foreign players and staff in Mie Prefecture in western Japan.

The team was set to play the Mie Honda Heat on Jan. 16 in League One, Japan’s newly established rugby league.

Mahe finally got a chance to send a message through a social networking site to his older brother who lives in Tongatapu, the main island of Tonga. He asked if a tsunami had hit the area and if the family was safe.

He did not receive a reply.

His wife, 31, also has family in Tonga. She told him that she was talking with her older sister on the phone when she heard a loud explosion-like sound, followed by people saying, “Tsunami is coming.”

The call was then cut off.

Since then, Mahe and his wife have called their families several times every day, but they could not get through as of Jan. 19.

They have tried to gain as much information as possible through TV and the internet.

“It appears that the (area) was hit by high tsunami and is covered with volcanic ashes,” Mahe said. “There must be serious damage.”

Mahe came to Japan in 2000 and played rugby at Daito Bunka University and on corporate teams, including the Munakata Sanix Blues in the Top League and the Kamaishi Seawaves in the Top Challenge League.

He retired as a player in 2019 and joined the staff of the Seawaves, a team now in Division Two of League One.

The team shot a video message for Tonga and posted it on the internet after a practice in Kamaishi on Jan. 19.

Mahe in his native language says in the video that the Seawaves as well as Kamaishi residents are praying for the recovery of Tonga from the disaster.

Kamaishi suffered catastrophic damage from the 2011 Great East Japan Earthquake and tsunami. It was named a host city for the 2019 Rugby World Cup and became globally known as a symbol of recovery and inspiration within the rugby world.

The Seawaves will travel to Tokyo for a game against the Hino Red Dolphins at Chichibunomiya Rugby Stadium on Jan. 23.

The team plans to raise money for Tonga at the venue and ask fans to support the cause.

Tongans are “big in both body and heart,” Mahe said. “But many of them must be in need and are struggling with uncertainty. There is not much that I can do right now, but I want to shore up support to bring their smiles back.”