EDITORIAL: 1 year in, Biden is failing to heal the divide left by his predecessor 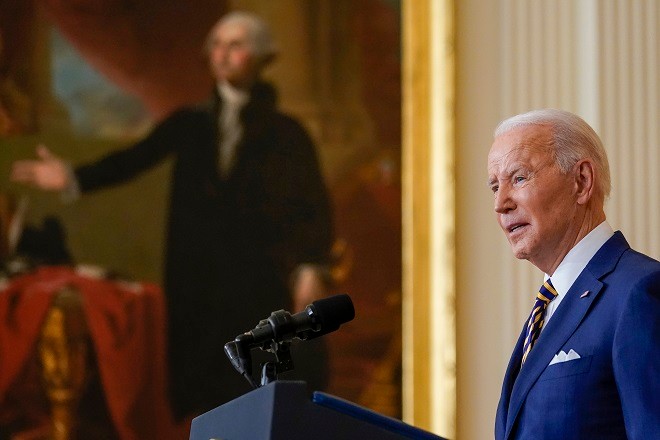 President Joe Biden speaks during a news conference in the East Room of the White House in Washington on Jan. 19. (AP Photo)

Many people may have almost forgotten the sense of relief and hope they felt when Joe Biden a year ago replaced the president who seriously undermined many of the values that the United States stands for through his reckless and arrogant actions.

It is still difficult to claim that the once predominant and hallowed superpower has regained its prestige.

Jan. 20 marked the first anniversary of Biden’s inauguration. The political divide in the United States that deepened during the Trump administration has continued haunting the nation. The Biden administration is going through a grueling struggle to heal the pain.

In addition to the political battle with the Republicans, Biden is also facing a group of Democrats opposed to his key policy initiatives. Biden is fighting an uphill battle to enact his signature Build Back Better bill, a massive spending package to fund a range of measures to enhance social welfare, rectify inequities and stem climate change.

His job approval ratings have fallen to uncomfortably low levels.

Biden got off to a seemingly smooth start. He rolled out a nationwide vaccination campaign to combat the new coronavirus ahead of most other industrial nations. He appointed women and members of minority groups to many important Cabinet and government posts to come across as a new leader committed to promoting diversity and change for the future.

On the diplomatic front, Biden took steps to bring the United States back to valuing international cooperation and its alliances, reversing the course set by his predecessor. The international community welcomed his decision to return Washington to the Paris Agreement on climate change.

Then, his presidency started faltering. Biden was roundly criticized for the chaos in Afghanistan triggered by his ill-thought-out decision to withdraw U.S. troops from the country.

A bout of inflation due to huge government spending and a labor shortage has battered household budgets. New COVID-19 virus variants have created fresh social unrest. As problems have mounted, public opinion in America has become increasingly critical of Biden’s leadership.

Given the burdensome legacy of tough challenges on both the domestic and diplomatic fronts left by the previous administration and the unpredictable nature of the pandemic, it would be unfair to pin all the blame for the current situation on Biden.

Biden has adopted some key political slogans to define his presidency--reconciliation and unity of the people, the battle between democracy and autocracy and foreign policy for the middle class. In announcing such policy principles and world views, Biden has only acted in the way the leader of a democratic superpower should act.

The question is whether he can offer detailed and convincing explanations about these phrases and map out and push through viable plans to achieve these policy goals.

Biden has yet to make his own notable political achievements that demonstrate his leadership skills and move his presidency beyond simply correcting mistakes made by his predecessor.

The Biden administration failed to hold substantial advance talks with U.S. allies to discuss in detail its plan to withdraw American troops from Afghanistan. It has also shown no clear signs of a willingness to lead international efforts to rebuild the global trade regime to promote free trade.

Unlike the Trump administration, unpredictability has not been a trait of the Biden White House. The international community remains uncertain, however, as to whether the United States has really made a clear departure from the Trumpian “America First” agenda or whether Washington can be trusted as the guardian of the world order in the coming years.

American society is being plagued by a serious rift. Many Republicans sympathize with the contention that the results of the 2020 presidential election were affected by voting fraud.

Both parties should be keenly aware that the decline in U.S. influence in the world cannot be stopped unless they confront the crisis of American democracy symbolized by the Jan. 6 mob assault on Congress a year ago.

In his inaugural address, Biden said, “Let us listen to one another.” We hope he will not forget the ideals with which he started out and rebuild American democracy by making effective efforts to overcome the divide through dialogue.