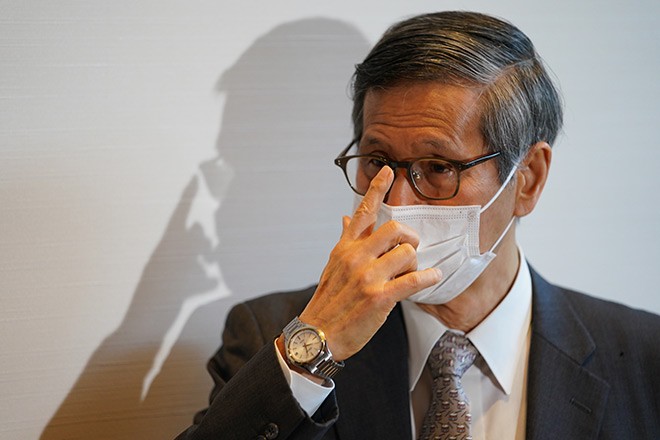 Shigeru Omi, chairman of the government’s expert panel on the COVID-19 pandemic, speaks to reporters after a panel meeting on Jan. 19 in Tokyo’s Chiyoda Ward. (Ryo Kato)

In a drastic policy shift to protect medical services, health experts said that young people with COVID-19 symptoms should be considered infected with the novel coronavirus without taking tests for confirmation.

They also said tough restrictions on people’s movements and other activities are not necessary in the latest wave of infections led by the Omicron variant.

The suggested proposals have drawn a cautious reaction from the central government.

“At present, people need to consult doctors or undergo testing if they are unwell,” health minister Shigeyuki Goto said at a news conference on Jan. 21.

Goto also said he was aware that the chair of the advisory panel for the Ministry of Health, Labor and Welfare, which discussed the proposals the previous day, had said that the measure of sparing young people from COVID-19 testing does not need immediate implementation.

The proposals will be finalized by the end of Jan. 21 after further discussions.

More than 20 experts, including Shigeru Omi, chairman of the government’s expert panel on the COVID-19 pandemic, presented the draft proposals at a meeting of an advisory board for the health ministry on Jan. 20.

The suggested measures reflect the experts’ belief that Japan needs different policies than those implemented in previous infection waves because the focus now is on mitigating pressure on the health care system.

In addition, they feel the new measures should better match the characteristics of the Omicron variant.

In Japan so far, novel coronavirus infections are confirmed only after a doctor sees the results of a PCR or other test.

To avoid straining medical services if the virus continues to spread, the experts said those tests and possible treatments should be limited to people who are at a higher risk of becoming seriously ill after catching the virus, such as senior citizens.

Younger people with no underlying conditions should not be taking these tests and should be diagnosed as infected based on observations of their symptoms, the experts said.

The draft proposals, however, do not specify the observation criteria for a COVID-19 diagnosis.

The experts did say that if infections spread further, they would ask the government to review how patients should consult doctors.

They said the spread of the Omicron variant could peak in around two weeks’ time.

Although the Omicron variant is more contagious than other strains, including the Delta variant, people under 50 years old with no underlying conditions tend to develop only mild symptoms after contracting Omicron and can recuperate at home, the experts said.

The draft proposals say that if young people and others with mild symptoms start to flood testing facilities, such as PCR sites, and outpatient hospital departments in the days ahead, people at greater risk, especially seniors, could become seriously ill and have no access to the testing facilities or hospitals.

The draft proposals also say that measures to deal with the Omicron wave should not prevent society from functioning.

The experts say that limiting the sizes of groups at events or in locations where the risk of infection is high would be an effective measure in the Omicron wave.

That would also represent a move away from the policy of restraining the flow of people outside of their homes.

The experts, in fact, say there is now no need to restrict travel across prefectural borders because such trips carry a lower risk of infection.

The latest infection wave has produced record-setting numbers of new COVID-19 cases around the country. Many prefectures have asked the central government to approve pre-emergency measures for their areas.

Some central government officials remain cautious about the proposed change in direction in dealing with the virus.

One senior official said the government can’t allow young people to be diagnosed as being infected with COVID-19 without testing.

“We can’t take responsibility if people get seriously ill from COVID-19 after we spare them from testing,” the official said.

● Government should limit size of groups at events or in locations where risk of infection is high but not restrain flow of people outside their homes.

● Government should allow only brief drinking sessions among small groups of people who see each other regularly. Partying or dining in large groups should be avoided. If held, attendees should be limited in number and take antigen tests on day of event.

● Attending concerts or sport events presents low risk of infection. People at these events should social distance and watch quietly as they have been instructed to do.

● Restrictions not needed for travel to other prefectures.

● If number of infections increases significantly, young people should be diagnosed as infected with COVID-19 based on observation of their symptoms, without undergoing testing. This is because young people infected with Omicron variant tend to get better after resting at home.

● If infections spread even further, government should review how patients consult doctors and how doctors diagnose patients, depending on their symptoms.

(This article was written by Kai Ichino and Yuki Edamatsu)