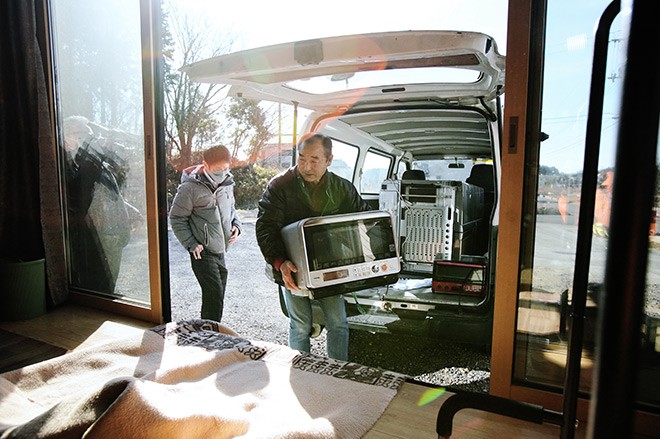 FUTABA, Fukushima Prefecture--More than a decade after the Fukushima No. 1 nuclear power plant accident, evacuees such as Yoichi Yatsuda were finally allowed to stay overnight in their homes here again.

Yatsuda, 70, who lives in Minami-Soma in the prefecture as an evacuee, returned home with his wife and their dogs on Jan. 20 and carried in a microwave and a refrigerator to his house.

“The day has finally come,” said Yatsuda. “I want to live the way I used to even if it’s not exactly the same.”

Futaba residents were allowed to return home temporarily in preparation for their eventual permanent return.

“We’re confident that our town can have more people settle in by creating an environment where residents returning home can feel they made the right decision,” said Futaba Mayor Shiro Izawa.

Futaba is the only municipality in Fukushima Prefecture where no residents have been able to return home permanently since the triple meltdown at the crippled plant on March 11, 2011.

Almost all parts of the town are designated as a “difficult-to-return” zone, where an evacuation order remains in place due to high levels of radiation following the nuclear accident.

From early in the morning of Jan. 20, residents who have long waited for their permanent return started their first overnight stays in their homes since the disaster to prepare to rebuild their lives.

Yatsuda expressed anger toward Tokyo Electric Power Co., the plant’s operator, because he had to evacuate his home following the nuclear accident that was triggered by the Great East Japan Earthquake and tsunami.

Yatsuda said he has longed for the day to return to his hometown as he has moved from one place to another, both in and outside the prefecture, since the disaster.

But the area around his home has changed dramatically, and only 15 residents from 11 households applied for preparatory overnight stays.

“It’s sad,” said Yatsuda. “I want the authorities to come up with measures to encourage young residents to return home.”

Of the seven municipalities that have a difficult-to-return zone in their jurisdictions, six, except Minami-Soma, which has no residents registered in the zone, have gradually started allowing preparatory overnight stays in regions designated as a reconstruction priority area.

In the reconstruction priority area, the central government is making intensive decontamination efforts to lift the evacuation order for the regions.

(This article was written by Keitaro Fukuchi and Mamoru Nagaya.)