EDITORIAL: Kishida is way too defensive as he tries to avoid missteps 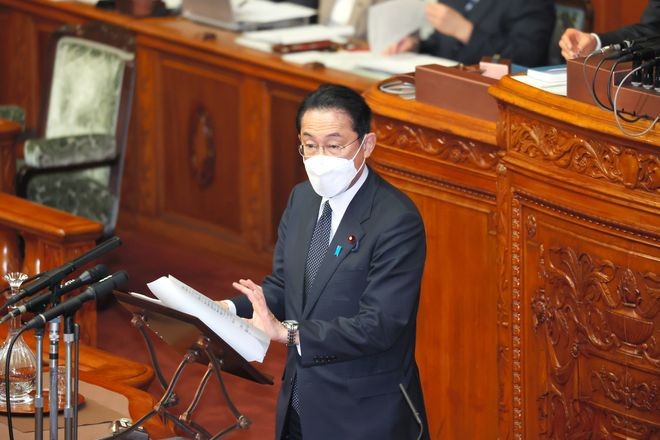 Prime Minister Fumio Kishida’s answers to questions in the Diet about his policy speech were couched in polite terms but mostly came across as empty and without substance. Kishida will risk being accused of shying away from taking political responsibility if he keeps trying to avoid costly blunders in the leadup to the Upper House election this summer.

Diet sessions are now over for representatives of other parties to quiz Kishida about his speech. In the meantime, COVID-19 pandemic figures, driven by the Omicron variant, are breaking records day after day. The government scrambled to respond to the latest surge by applying pre-emergency measures to more prefectures. Unsurprisingly, the hottest topic during the three days of sessions that ended Jan. 21 was the government’s strategy for dealing with the Omicron wave.

Kishida stressed that his administration is taking “proactive” measures to prepare the nation’s health care system for an explosive expansion. When Kenta Izumi, the head of the opposition Constitutional Democratic Party of Japan, criticized the government’s plan to wait until June to review its strategy, Kishida stated that time is needed to assess steps taken to date and coordinate with the organizations involved.

When Kazuo Shii, the chairman of the Japanese Communist Party, asked about delays in rolling out third COVID-19 vaccination jabs, noting that the ratio of those who have received booster shots is still below 2 percent of the population, Kishida said the program will gather speed in the coming weeks and promised to move up schedules.

His remarks did not indicate a readiness to accept responsibility for the slow pace.

While Tokyo Governor Yuriko Koike has called on residents of the metropolis to avoid going out for nonessential purposes, experts advising the government on responses to the virus simply proposed restrictions on large gatherings instead of reinstating tough curbs on people’s movements. They said there is no need to ask people to “stay home.”

The public remains baffled by the stream of confusing signals from policymakers and experts. Kishida has missed many opportunities to offer detailed explanations about the government’s policy.

Nobuyuki Baba, the co-leader of Nippon Ishin (Japan Innovation Party), took a swipe at Kishida’s “new form of capitalism” initiative, saying it amounted to a grab bag of old policy measures. When Baba asked what “essentially new” policies Kishida has in mind when he talks about new capitalism, the prime minister did not give a straight answer and just outlined basic ideas behind the initiative.

Yuichiro Tamaki, the leader of the Democratic Party for the People, acknowledged the need to consider giving the Self-Defense Forces the ability to strike enemy bases, as the administration intends to do, and asked Kishida what specific weapons systems would be used and how viable the plan would be. But Kishida only repeated a familiar refrain: that his administration will “consider (the proposal) from a realistic point of view without ruling out any option.”

During the sessions, Kishida’s answers and responses were, by and large, extracts from his policy speech.

Kishida is fond of stressing his “ability to listen to others.” But simply listening to what other people say does not help ensure in-depth debate. If he wants to refine his policies and help the nation understand them better, Kishida needs to speak candidly about his thoughts and exchange opinions with other politicians.

In announcing his candidacy for the ruling Liberal Democratic Party’s leadership election last year, Kishida voiced his concerns about the health of Japan’s democracy. “The voices of the people do not reach politicians,” he said. “Politicians’ explanations do not reach the hearts of the people.”

We hope Kishida will change his approach during Budget Committee sessions, where he will have to answer each question as it is posed, and offer explanations that will find a resonance among the public.