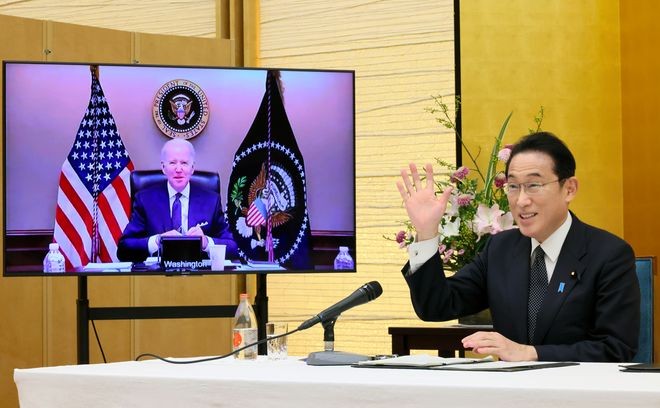 Kishida said the two leaders spent a “significant amount" of their 80-minute call on issues surrounding China, including shared concerns about China's increasing aggression toward Taiwan. China claims self-governing Taiwan as its own territory, to be annexed by force if necessary. In recent months, China has stepped up military exercises near Taiwan, frequently sending warplanes near the island's airspace.

Biden and Kishida also discussed the situations in Hong Kong and China's Xinjiang province. Biden has repeatedly called out Beijing over its crackdown on democracy activists in Hong Kong and forced labor practices targeting China’s Uyghur Muslims and other ethnic minorities in Xinjiang.

“President Biden and I were able to exchange views frankly, in a very calm and quiet manner, about how Japan and the United States together cooperate and lead the international society, which I believe will lead to further strengthening of the Japan-U.S. alliance,” Kishida said after the meeting.

The White House said the leaders also spoke about opportunities to enhance economic ties between the two nations, launching a new “2 plus 2” dialogue focused on addressing economic issues, ranging from supply chain challenges and investment in key technologies to further cooperation on trade issues. Japan also expressed support for the Biden administration's proposed Indo-Pacific Economic Framework, and pledged to work to build support for the initiative in the region.

The U.S. official said Biden and Kishida had had a "robust" discussion on the need for the United States to play an active role in trade and commercial architecture in Asia.

The Biden administration has been criticized for lacking a solid economic pillar to its strategy for Asia after then-President Donald Trump quit a regional trade framework now known as CPTPP in 2017, but it has been wary of returning to a pact critics say threatens U.S. jobs.

Biden accepted Kishida's invitation to visit Japan later this spring for an official visit and to attend this year's Quad Summit, the meeting held between the leaders of Japan, the United States, Australia and India.

Japan remains concerned about China's intentions in the South China Sea, where it has stepped up its military presence in recent years, and the East China Sea, where there is a long-running dispute about a group of uninhabited islets administered by Tokyo but claimed by Beijing.

Kishida said after the meeting that he expressed his determination to drastically strengthen Japan’s defense power while Biden spoke of the U.S. commitment to abiding by the 1960 Japan-U.S. security treaty and made it clear it covers the Japanese-controlled disputed islands of Senkaku, which China refers to as Diaoyu.

The Chinese embassy in Japan issued a statement on Saturday in which it said that Biden and Kishida's video meeting made "groundless attacks" on China and "grossly interfered" in its internal affairs, adding that it had lodged stern representations.

"We urge Japan and the United States to follow the trend of the times, abandon narrow policies of zero-sum game and beggar-thy-neighbor, stop interfering in China's internal affairs, and stop drawing small circles based on ideologies.

The virtual meeting came after North Korea this week suggested it might resume nuclear and long-range missile testing, which has been paused for more than three years.

North Korea’s Kim Jong Un on Thursday presided over a Politburo meeting of the ruling Workers’ Party at which officials set policy goals for “immediately bolstering” military capabilities to counter what were described as the Americans’ “hostile moves,” according to the Korean Central News Agency.

The White House said Biden made clear to Kishida that the U.S. would work closely with South Korea and Japan on next steps to discourage North Korea from further provocation. The Biden administration expects to announce further steps to address North Korea in the coming days, according to a senior administration official who spoke on the condition of anonymity.

The two leaders discussed ongoing efforts in the COVID-19 pandemic and the brewing crisis in eastern Europe, where Russia has massed some 100,000 troops near its border with Ukraine. Biden earlier this week said he believed Russian President Vladimir Putin is likely to order a further invasion of Ukrainian territory but he did not think Putin wanted an all-out war.

Kishida, who is from Hiroshima, on which the U.S. dropped an atomic bomb at the end of the World War II, said he raised to Biden concerns about nuclear security and the idea of achieving “a world without nuclear weapons.”

Biden and top aides have sought to rally the support of NATO partners and other allies to respond with harsh sanctions against Russia if it moves forward with military action. Kishida expressed support for Biden's efforts to deter Russia, and made clear that Japan would be fully behind the U.S. and continue to coordinate with other allies on taking strong action should Russia attack, according to the Biden administration official.

On Thursday, in preparation for the leaders' call, Biden's national security adviser Jake Sullivan and his Japanese counterpart, Takeo Akiba, held their own call to discuss North Korea, China and “the importance of solidarity in signaling to Moscow the strong, united response that would result from any attack” on Ukraine, according to the White House.

Friday's virtual meeting was the first substantial exchange between the leaders since Kishida took office in October. They had a brief conversation on the sidelines of a climate summit in Glasgow in November. Biden was the first leader to call Kishida, on the morning of his first full day in office.

Biden, who has sought to put greater focus on the Indo-Pacific amid China's rise as a world power, had built a warm relationship with Japan's last prime minister, Yoshihide Suga, and is hoping to build a similar rapport with Kishida.