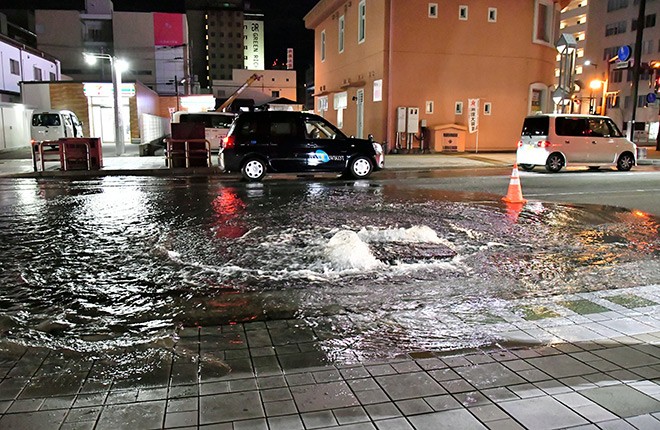 The quake hit at 1:08 a.m. and registered upper 5 on the Japan Meteorological Agency’s intensity scale of 7 in the two prefectures on the main southern island of Kyushu. It had an estimated magnitude of 6.6. No tsunami advisory was triggered.

Among municipalities that recorded intensities of upper 5 were Oita, Saiki and Taketa in Oita Prefecture and Nobeoka and Takachiho in Miyazaki Prefecture.

According to Saiki municipal government officials, three residents were rushed to hospitals by ambulance. They said a man in his 80s fell while trying to evacuate and another in his 60s was hit by a falling object at home. A woman who evacuated to the Saiki government building complained of feeling unwell.

The Hyuga fire department in Miyazaki Prefecture said a man in his 40s was taken to hospital with an injury to his face after he fell at home. In the city of Nobeoka, the quake toppled electricity poles.

Injuries were also reported in Kumamoto, Saga and Yamaguchi prefectures.

Officials of Kyushu Electric Power Co. said no irregularities were reported at its Genkai nuclear power plant in Saga Prefecture or the Sendai nuclear plant in Kagoshima Prefecture.

However, the earthquake disrupted Kyushu Shinkansen bullet train services as well as some local lines, mainly in Oita Prefecture.

A meteorological agency official told a news conference early Jan. 22 that the focus of the quake was in the Hyuganada Sea, an area that constitutes part of the Nankai Trough, a roughly 4-kilometer depression on the seabed that extends about 700 kilometers from Suruga Bay off Shizuoka Prefecture to areas off eastern Kyushu.

Shinya Tsukada, the director of the Earthquake and Tsunami Observation Division at the JMA, said that at 45 km below the surface the quake was much deeper than the projected focus of a Nankai Trough temblor on the border of the continental and oceanic plates.

(Hidemasa Yoshizawa contributed to this article.)