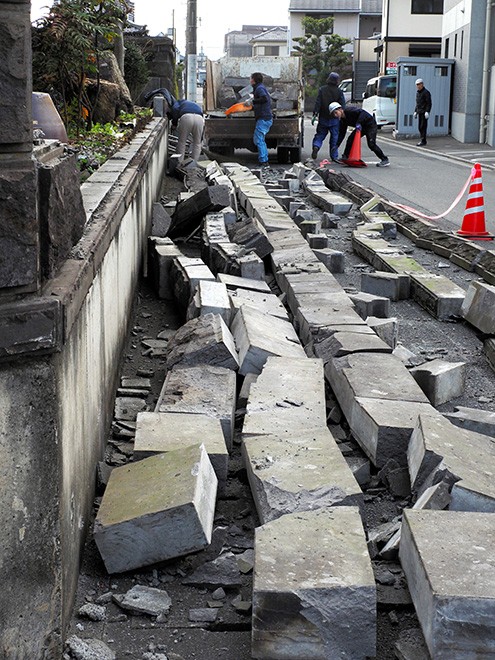 Pieces of a collapsed wall block part of a street in Oita after a strong earthquake hit Jan. 22. (Shoma Fujiwaki)

The assessment by seismologists at the Japan Meteorological Agency concerned a temblor that registered upper 5 on the Japanese intensity scale of 7 in Oita and Miyazaki prefectures in the main southern island of Kyushu.

A Nankai Trough megaquake is expected to strike along the boundary between a continental plate and an oceanic plate. But the Jan. 22 temblor occurred inside the oceanic plate, which lies at a greater depth than the boundary, according to the JMA.

The focus of the earthquake was deep under the Hyuganada sea off Miyazaki Prefecture.

It sparked concern the temblor could be a precursor to a devastating quake projected to occur along the Nankai Trough, a roughly 4-kilometer depression on the seabed that extends about 700 kilometers from Suruga Bay off Shizuoka Prefecture on the main island of Honshu to eastern Kyushu. The Hyuganada sea is regarded as a possible focal area for a megaquake.

The JMA estimated the quake had a magnitude of 6.6 and its focus was 45 kilometers below the surface.

At least 10 people were injured in falls while evacuating in Oita and Miyazaki prefectures. Water mains burst in several locations, flooding roads, in Oita. Cracks also appeared in roads there.

The government projects the possibility of a Nankai Trough megaquake striking within 30 years at between 70 and 80 percent.

Quakes in the class of magnitude-6 to -7 whose focus was in the Hyuganada sea have repeatedly struck.

Naoshi Hirata, who chairs a panel of seismologists at the JMA, dismissed the likelihood that a Nankai Trough quake will follow the Jan. 22 rumble.

“Although it caused strong shaking in the area that is presumed to be a possible focal point for a Nankai Trough megaquake, it is less likely to directly trigger it,” he said.

His rationale was that the the temblor was believed to be an oceanic intraplate earthquake.

Yusuke Yamashita, an assistant professor of seismology with Kyoto University’s Research Center for Earthquake Prediction who works at the center’s observation station in Miyazaki, concurred with the panel’s assessment.

“Considering the scale and mechanism of the latest quake, there is no reason to assume it is associated” with a Nankai Trough megaquake, he said.