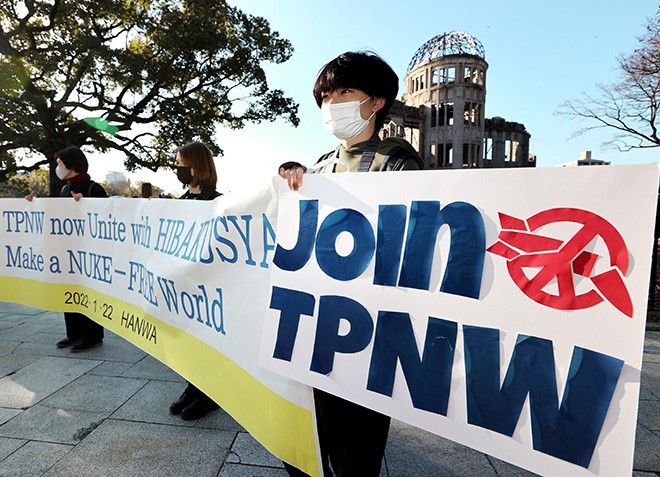 Members of a civic group call on Japan to sign the U.N. Treaty on the Prohibition of Nuclear Weapons near the Atomic Bomb Dome in Hiroshima on Jan. 22. (Jun Ueda)

Supporters of a U.N. treaty banning nuclear weapons gathered Jan. 22 in Hiroshima and Nagasaki to mark the first anniversary of the pact going into force, stepping up their calls on Japan to sign it.

Standing in front of the symbolic Atomic Bomb Dome in Hiroshima, 10 or so members of a Hiroshima-based group calling for the abolition of nuclear weapons hoisted a banner that read the “whole world should join the Treaty on the Prohibition of Nuclear Weapons.”

“Unless Japan, the only country in the world to have been ravaged by atomic bombing, speaks out in the international community, it will be impossible to eliminate nuclear weapons,” said Shuichi Adachi, a lawyer representing the group.

Participation in the rally was kept to a minimum as a safety precaution against the COVID-19 pandemic.

Tomoyuki Mimaki, a representative of the association of A- and H-bomb sufferers in Hiroshima Prefecture, expressed disappointment with a joint statement released Jan. 21 by Tokyo and Washington on the issue of nuclear weapons.

“They treated the question with kid gloves,” he said dismissively, noting that although the statement encouraged the world’s political leaders and youth to visit Hiroshima and Nagasaki, it made no reference to the treaty.

Mimaki, 72, said he sent a letter to Prime Minister Fumio Kishida, who is from a constituency in Hiroshima, urging Japanese representatives to attend the first meeting of signatory countries of the treaty in Austria in March as observers.

Attendance on the part of Japan, he said, is indispensable as Kishida has pledged that Tokyo will work as an intermediary between the nuclear and nonnuclear powers.

In Nagasaki, about 150 nuclear-bomb survivors and their supporters gathered in the Peace Park to press the Japanese government to join and ratify the treaty.

“The government continues to ignore the treaty even though many countries have signed it,” said Shigemitsu Tanaka, president of the Nagasaki Atomic-bomb Survivors Council. “We want to get the public become familiar with the treaty so we can join forces in applying pressure on the government.”

Fifty-nine countries and territories have ratified the treaty.

But the nuclear powers as well as Japan, which is protected under the U.S. nuclear umbrella for its defense purposes, have refrained from doing so.

According to the Japan Council against Atomic and Hydrogen Bombs, 627 assemblies, or 35 percent, of the 1,788 local governments, including those at the prefectural level, had adopted a resolution as of Jan. 12 calling on the Japanese government to sign and ratify the treaty.

The figure included 90 or so local governments that adopted the resolution after the treaty went into force in 2021.

“The resolution adopted by local governments reflects public opinion and thus is more visible,” said Shiro Maekawa, an official of the council who tracks the trend among local governments on the issue. “The Japanese government should hear what the public says.”