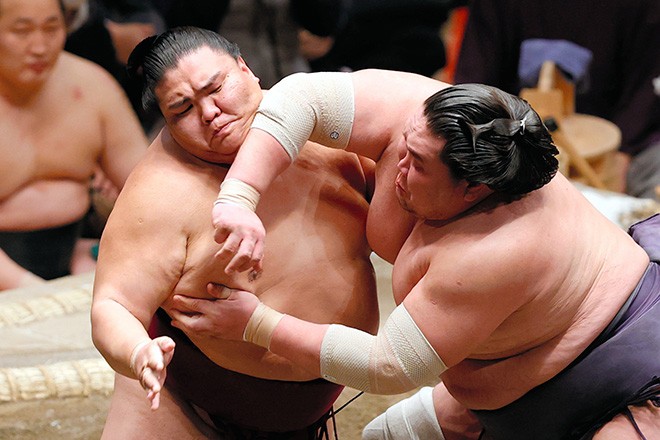 Sekiwake Mitakeumi clinched his third career championship with a 13-2 record by defeating yokozuna Terunofuji in a showdown of the last day of the New Year Grand Sumo Tournament in Tokyo on Jan. 23.

The victory ensures his promotion to the second-highest rank of ozeki, and officials of the Japan Sumo Association called an emergency meeting to discuss the matter.

“It felt so long,” Mitakeumi said of the 15-day tourney after winning the title. “I was worried at one point about whether I could hold up mentally, but I was able to take the pressure and did well in the latter part of the tournament.”

Mitakeumi entered Day 15 one win ahead of the lone yokozuna, maegashira No. 5 Abi, and maegashira No. 14 Kotonowaka in the meet at Ryogoku Kokugikan.

Mitakeumi’s last championship bout was about two years ago. This time around, with the pressure piling up, he had to ensure the Mongolian-born wrestler hit the dirt and avert being forced to fight in a playoff with a loss to Terunofuji.

His track record against Terunofuji is not good, having won only four of 16 bouts against him to date.

Still, Mitakeumi appeared poised and calm and shoved the yokozuna out of the ring.

Terunofuji was not in top form due to knee injuries and unable to sustain his stamina as the tournament progressed into the last stretch.

On the other hand, Abi’s performance was impressive.

He defeated Terunofuji in a stunning upset on Day 14, dragging the highest-ranked wrestler from a two-way tie with Mitakeumi.

Kotonowaka took his fourth loss in the battle against Abi on Day 15, dropping out of the title race.