EDITORIAL: Japan-U.S. alliance should fulfill the need to be a ‘public good’ 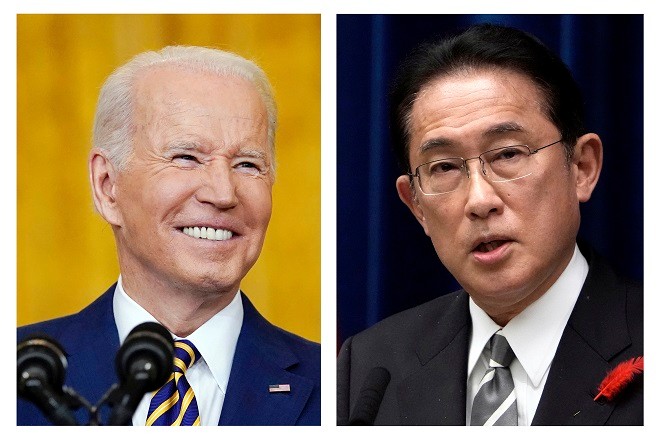 The two leaders agreed, among other things, that Japan will host a summit of the so-called Quad framework--Japan, the United States, Australia and India--in the first half of this year, with Biden invited to attend.

They also agreed to set up an “economic two-plus-two” meeting of the Cabinet members of both countries who oversee foreign affairs and the economy.

The world is falling into ever-deeper chaos, with China and Russia rattling their sabers in challenging the existing world order and authoritarian politics thriving across the globe.

Japan and the United States, in the meantime, share a set of universal values including freedom, democracy and human rights. Their latest summit should be a starting point for their comprehensive discussions on how to design a new world order and how to get international cooperation back on its feet.

A major concern for the two leaders is how to counter China’s rise on military and economic fronts.

During their summit, they underscored the “importance of peace and stability across the Taiwan Strait” and shared “serious concerns” about the human rights situation in Hong Kong and the Xinjiang Uighur Autonomous Region.

Kishida expressed his “determination to fundamentally reinforce” Japan’s defense capabilities, and told Biden that he is considering adding enemy base strike capability as one of the available options for Japan.

Both leaders rightly opposed China’s unilateral attempts to change the status quo and the country’s serious infringements on human rights.

Rattling the saber alone to confront saber-rattling, however, could only destabilize the region.

It is the duty of Japan and the United States to work out a comprehensive strategy that would also include initiatives for dialogue and trust building with China to seek a peaceful coexistence with the country to never allow a military encounter to occur.

A tough stance on China is believed to be one of the few points of consensus in the United States, which remains split along an entrenched partisan divide.

Japan, as a neighbor of China with deep economic and historical ties with the country, should play the role of a moderator of constructive engagement without being dragged along too far by the state of affairs in, and the intentions of, the United States.

Both leaders agreed to work together in dealing with North Korea’s nuclear and missile development programs and the situation surrounding Ukraine.

They also confirmed they will cooperate to prevent a spread of novel coronavirus infections in and around U.S. military bases in Japan, which proved to be a loophole that allowed people to bypass Japan’s anti-COVID-19 border control measures.

The anxiety of the residents of communities hosting the U.S. bases, however, will not be dispelled unless the Japan-U.S. Status of Forces Agreement, which exempts U.S. military personnel from Japan’s quarantine measures, are taken up squarely for discussions.

The two leaders confirmed they will work together toward a “world without nuclear weapons.” Officials said, however, that they did not discuss the Treaty on the Prohibition of Nuclear Weapons (TPNW).

Prior to the summit, Tokyo and Washington released a joint statement on the Nuclear Nonproliferation Treaty, in which they called on world political leaders to visit Hiroshima and Nagasaki but did not touch on the TPNW, either.

Arguments of the two governments would not sound persuasive unless they were to present effective measures for preventing a war between nuclear weapon states, for nuclear arms reduction and nonproliferation.

Some have described the Japan-U.S. alliance not only as a cornerstone of Japan’s diplomatic and security policies but also as a “public good” that serves the stability and prosperity of the Asia-Pacific and, by extension, the world.

The alliance should live up to that commitment if the saying is true.