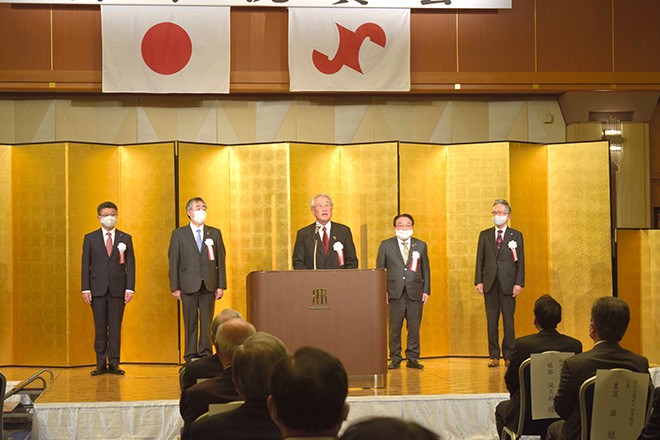 Older men occupy senior positions at the Kitakyushu Chamber of Commerce and Industry. Photo taken at its New Year’s party on Jan. 7 in Kita-Kyushu. (Hironori Kato)

Kyushu placed ninth out of 11 regions overall in a new gender-gap index that compares how different parts of the country fare on gender equality across various professions.

The Kyushu Economic Federation, a regional business lobby similar to Keidanren (the Japan Business Federation), created the new index to determine if Kyushu’s gender gap was worse than elsewhere.

The region has something of a reputation for having particularly domineering or patriarchal men, often stereotyped by the term “Kyushu danji” (Kyushu boys).

The index found that Okinawa had the smallest gender gap in the nation, while across Japan women are largely absent from local politics and the senior ranks of the civil service system.

Masumi Minagawa, an associate professor at Chuo Gakuin University who specializes in gender issues, welcomed the report but said it should have come with real, tangible commitments toward closing the local gender gap.

“It can’t be said that business associations have been proactive about making gender equality a reality,” she said. “So, the Kyushu federation’s approach is a good thing. But simply releasing this index is not satisfactory. I want the federation to say what it is going to do to improve the situation in the future.”

The federation itself is led by a male-dominated team, with its chair and 13 vice chairs all being men.

Japan as a whole lags behind in the World Economic Forum’s annual gender gap index ranking by country.

The federation took a similar approach to the WEF report and focused on four categories: the economy, education, health and politics.

It also added some categories, such as the male-to-female ratio of students majoring in math and science.

The index divided the nation into 11 regions across 15 categories.

The federation used the latest available data, as of 2020, and calculated an index and ranking for each region.

The closer the index is to one, the smaller the gender gap.

But there were cases where the numbers gave mixed signals, where the standard was low for both men and women, even though the gap was small and the ranking was high.

Minami-Kanto, which includes Tokyo, ranked second, while Kinki was the sixth and Tokai came in 10th.

Across the four categories nationwide, health had the best gender balance at 0.963.

Particularly significant was the male-to-female ratio among heads of local governments.

The scores on that were low across all 11 regions. Hokkaido was 0 while Minami-Kanto was the highest with 0.038.

When it comes to the ratio of men to women among civil servants whose position is division manager, department manager or higher, only Okinawa scored more than 0.1 with 0.142.

The male-to-female ratio among workers in managerial positions was also dismal. Tohoku and Kita-Kanto and Koshin were the highest with 0.200.

The federation said it used the labor force survey to calculate the index.

The regional gap stood out in the male-to-female ratio of local assembly members, as Minami-Kanto--which includes Tokyo and Kanagawa Prefecture--scored 0.309, while Okinawa was calculated at 0.111.

The gap was also notable in the male-to-female ratio among professional and technical occupations that pay a higher income than average. Okinawa was the highest with 0.443, while Tokai was the lowest with 0.296.

The federation is expected to create a gender gap index targeting companies in Kyushu by the end of the year.