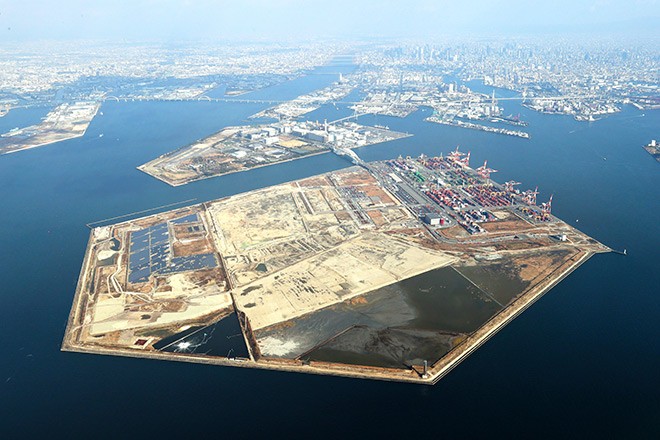 Construction is under way in Yumeshima island in Osaka in December 2021. The integrated resort will be built at the back end of the island, a venue for the 2025 Osaka Kansai Expo. (Asahi Shimbun file photo)

OSAKA--The estimated costs for developing a man-made island that will host the 2025 Osaka Kansai Expo have swelled by at least 230 billion yen ($2.02 billion) over the past year.

The ballooning costs for Yumeshima island in Osaka Bay follow revelations of soil liquefaction and contamination that would jeopardize the structural integrity of the land if not dealt with properly.

The artificial island, which spans about 390 hectares, has long been a bitter legacy for the city. It was forced to abandon its development project there following the bursting of the bubble economy in the early 1990s.

The island currently has a container terminal that serves as a logistics hub, along with a solar power generation facility. But many plots of land remain vacant.

The Osaka prefectural and city governments announced an outline of a draft development plan in December for a casino-centered integrated resort in the island. They revealed that roughly 79 billion yen would be needed for measures against soil liquefaction and contamination, along with other work.

The local authorities said the city government, which owns the land, would earmark the 79 billion yen from a special account using revenues from the landfill project in Osaka Bay. Officials added they plan to issue bonds to secure the necessary funds.

Osaka Mayor Ichiro Matsui insisted that they can repay the holders of the bonds, counting on revenue from annual land lease payments of 2.5 billion yen from the operators of the integrated resort and on the 20.3 billion yen in funds related to the infrastructure development project.

While the costs are necessary for safety, he said he believes the project will be a success.

“If the integrated resort project were to end in total failure, it would be when Yumeshima is ravaged by a catastrophic natural disaster,” said Matsui.

Work is under way to extend the Hanshin Expressway’s Yodogawa-Sagan Route, which is set to be used as an access road to the Expo venue ahead of the event.

But the construction project is expected to cost more than 1.6 times the initial estimate of 116.2 billion yen. Soil decontamination measures necessary for the 4.4-kilometer section currently under construction will rack up extra costs of up to 75.6 billion yen.

The costs for extending Osaka Metro Co.’s Chuo Line to the island were initially estimated at 25 billion yen. But that figure is also expected to balloon to 34.6 billion yen. That is because an extra 9.6 billion yen is needed to take measures to shore up the soft ground and to remove obstacles from the ground.

Matsui acknowledged that the initial estimates were too optimistic and that his city’s quality control measures were lax.

But he said he will approve the massive additional costs for the development project. He said he wants to turn the bayside area into Osaka’s major attraction.

Rosy cost estimates also became an issue at last summer’s Tokyo Olympics and Paralympics, which were pushed by the central and Tokyo metropolitan governments. The tab for holding the Games was initially estimated at 1.35 trillion yen but then swelled to 1.453 trillion yen.