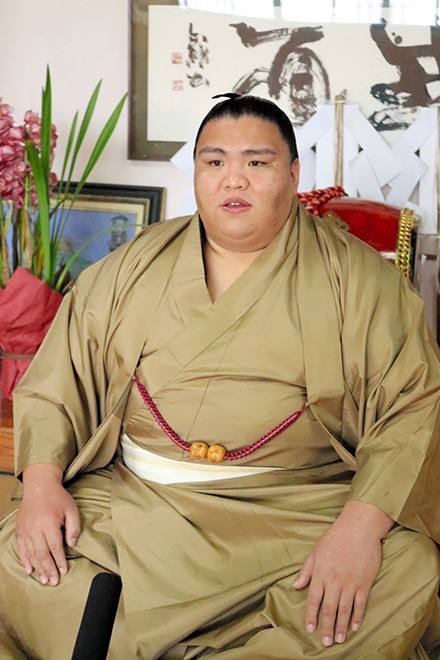 Sekiwake Mitakeumi speaks in an online news conference on Jan. 24, the day after he won his third championship at Tokyo’s Ryogoku Kokugikan. (Provided by the Japan Sumo Association)

Less than a month into 2022, sekiwake Mitakeumi has already fulfilled his goal to start the new year, with his promotion to the sport's second-highest rank of ozeki now guaranteed.

So, a day after winning his third grand sumo championship, the 29-year-old wrestler was ready to start from scratch.

“I have been sure for a long time that I absolutely must become an ozeki,” said Mitakeumi, of Nagano Prefecture, in an online news conference on Jan. 24. “I am ready to stand at the starting line again.”

He won the New Year Grand Sumo Tournament in Tokyo on Jan. 23 with a 13-2 record, pushing out yokozuna Terunofuji on the final day to avoid a three-wrestler championship playoff.

Mitakeumi's long ascent to ozeki took him more than five years after he rose to the sport’s fourth-highest rank of komusubi.

For some time, Mitakeumi had often expressed his strong desire to shoot for ozeki.

But he became less assertive about it later, particularly after he fell behind Shodai and Asanoyama, wrestlers who joined professional sumo after competing in the college ranks like he had. Both rivals won promotion to ozeki while Mitakeumi had to be content biding his time.

When he was told that he will be promoted to ozeki after capturing the Emperor’s Cup, Mitakeumi, overwhelmed by emotion, could not utter a word for about 20 seconds during the award ceremony interview on Jan. 23.

Finally, he said in a choked voice, “I am so happy about it because becoming ozeki is something you cannot attain easily.”

Mitakeumi described himself as “cheerful, quick to give up, tending to feel low.”

He was often regarded as a leading candidate for promotion to ozeki. The ascension had evaded him because he ended up losing to many rank-and-file wrestlers that derailed his promotion bids.

But Mitakeumi felt strongly that he could not continue remaining on the cusp of promotion as 2022 marks his final year in his 20s.

“I feared that I may give up being promoted to ozeki after all if I cannot make it happen this year, considering my character,” he said in the online interview after his triumph.

His promotion to ozeki will become official after an extraordinary meeting of the Japan Sumo Association’s board of directors that will be convened to consider the matter on Jan. 26.

His next challenge will be what he will say in his “kojo” speech during the ceremony after being officially informed of his new rank.

“I want to make it simple, not saying anything complicated,” Mitakeumi said. “I already have an idea.”