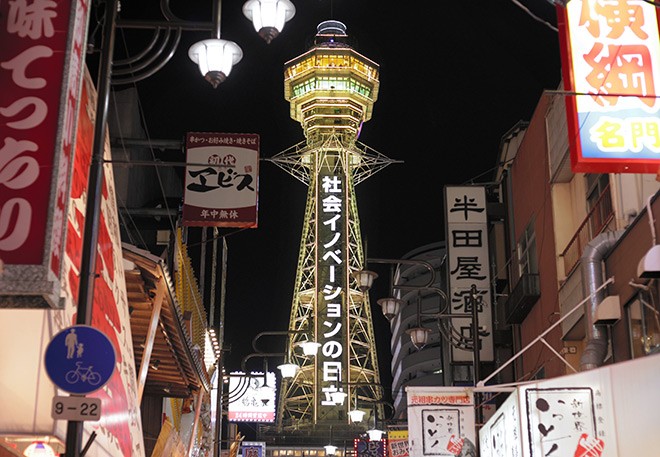 The Tsutenkaku Tower in Osaka is lit up in yellow to encourage caution against rising cases of the novel coronavirus on Jan. 8. (Asahi Shimbun file photo)

OSAKA--Osaka Governor Hirofumi Yoshimura on Jan. 24 said the prefecture will issue a “red alert,” effectively putting the prefecture under a state of medical emergency over the COVID-19 pandemic.

The alert is based on its own barometer called the “Osaka model.”

The governor reached the decision when the occupancy rate of the prefecture’s 3,734 hospital beds was projected to soon reach 50 percent, the threshold for declaring an emergency.

The rate of hospitalization among COVID-19 patients dropped to 3.7 percent on Jan. 23.

Yoshimura told reporters that he issued “a state of emergency due to the rapid spread of the Omicron variant.”

He said that in addition to hospital beds being overwhelmed, he expects a conflict to emerge between general health care services and COVID-19 care.

Yoshimura also said a large-scale center for coronavirus treatment and recovery that has 1,000 beds, set up at an international exhibition hall in Osaka, will open within a week.

The center was established to prepare for a disaster-level emergency when health care organizations and accommodation facilities become unable to take in all the patients in need of care.

Yoshimura said the center will begin operating as a temporary shelter because the number of patients recuperating at home now exceeds 20,000.

The central government is expected to issue pre-emergency measures for Osaka, Hyogo and Kyoto prefectures on Jan. 25.

But Osaka Prefecture may request a full state of emergency.

The Osaka prefectural government had placed the prefecture under “yellow alert” since Jan. 8 and has urged residents to be on the alert for a surge in infections.

Of 3,122 beds for mild and moderate patients, 56.4 percent of the beds were occupied.

Of the 612 beds for severe patients, 3.8 percent were occupied.