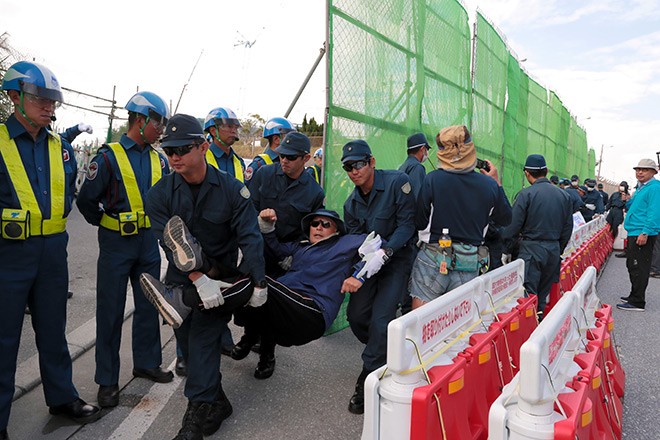 What do citizens of Nago, Okinawa Prefecture, think about the central government's program to relocate U.S. Marine Corps Air Station Futenma to the Henoko district in their city?

They made their will perfectly clear way back in 1997, when a referendum was held on this issue. Votes opposing the relocation outnumbered those in favor, establishing a solid majority.

Referring to this outcome, Fumio Kyuma, then director-general of the Defense Agency (present-day Defense Ministry), used the expression "shugu seiji" (rule by the masses).

Decrying the plebiscite itself, Kyuma declared, "(The balloting) should not have been held. Japan does not practice direct democracy because rule by the masses is considered destructive to our nation."

Cries of outrage were raised by Okinawans and others, and Kyuma was immediately forced to admit the inappropriateness of his comment.

But from the actions the central government has continued to take to this day, it is clear that direct or indirect democracy has nothing to do with Tokyo's consistent disregard of Okinawa's anti-relocation public opinion.

When Takeshi Onaga (1950-2018) was elected governor of Okinawa in 2014 on his "all-Okinawa" campaign platform opposing the relocation program, Tokyo paid little attention to the election outcome.

And when more than 70 percent of Okinawans said "No" to the program in a prefectural referendum that was held after Tokyo started reclaiming land in the sea off Henoko, the central government still refused to call off the work.

Tokyo's action even reminds me of a classic case of domestic violence, where the offender uses physical violence to force the victim into total submission. As well, ignoring everything the victim says constitutes psychological violence--a technique that wears down the victim's will to resist.

In the Jan. 23 Nago mayoral election, the "silent" incumbent who has never voiced his position on the contentious program was re-elected to a second term.

Did this owe to voter's feelings of futility or helplessness, acquired over decades of their voices never being listened to?

Their sense of resignation could not be missed from the lowest voter turnout in history.