EDITORIAL: Nago poll result does not mean voters resigned to base plan 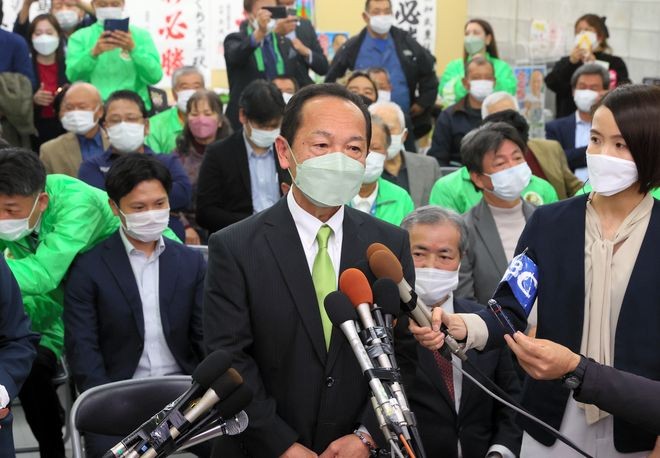 Taketoyo Toguchi after ensuring he would win re-election as mayor of the city of Nago, Okinawa Prefecture, on Jan. 23 (Minako Yoshimoto)

Government-backed incumbent Taketoyo Toguchi was comfortably re-elected as mayor of Nago, Okinawa Prefecture, on Jan. 23. His rival, who had the support of Okinawa Governor Denny Tamaki, campaigned against the central government’s relentless drive to build a U.S. military base off the city’s Henoko district.

Prime Minister Fumio Kishida’s government is forging ahead with a contentious land reclamation project aimed at providing a replacement facility to take over the functions of the U.S. Marine Corps Air Station Futenma in Ginowan, also in the prefecture.

The outcome of the first of a series of important elections to be held in Okinawa this year delivered a heavy blow to “All Okinawa,” a nonpartisan political force supporting Tamaki. An Upper House election is slated for summer and a gubernatorial poll will be held in autumn.

A simplistic view of the election outcome would suggest it meant acceptance of the base plan by local voters. But that would fail to take into account the complicated feelings that residents harbor over this issue. Okinawans are victims of the central government’s high-handed actions to push through its confused policy on the issue over the past quarter century, and this has caused a serious rift in the local community.

The Asahi Shimbun, in tandem with a local news outlet, initiated a survey immediately after the official campaign period for the election began and found that the largest number of voters, 54 percent, were opposed to the Henoko base plan. This compared with 24 percent who supported it. But when asked about issues that would most affect their decisions at the polls, 50 percent cited measures to promote local development, compared with 30 percent for the Futenma relocation project.

The poll indicated that voters’ attention was being drawn to pocketbook issues due to economic repercussions from the COVID-19 pandemic.

Voter turnout was a record-low 68.32 percent, down more than 8 points from the previous mayoral election. The low voter turnout was no doubt due in part to COVID-19 restrictions on election campaigns. But we are troubled by the sense of resignation expressed by many citizens who said nothing would change no matter how loudly they express their opposition to the government’s plan.

Voters in Okinawa have elected local government chiefs and Diet members opposed to the U.S. base plan and expressed their clear rejection in a prefectural referendum. But successive administrations kept pushing the Henoko base project, which the government claims is the “only option.” The will of the voting public in the prefecture has been brutally ignored.

The very foundations of democracy are put at risk once voters become cynical about the relevance of their votes to express their will through elected representatives.

Since he was first elected Nago mayor four years ago, Toguchi has consistently refused to clarify his stance toward the Futenma relocation plan. During his campaign, he stressed that he has provided free school lunches, free day care and free medical care for children to support child-rearing families, calling them his main political achievements. These programs were financed mostly by state grants provided to municipalities that host U.S. military facilities. Some voters probably decided to vote for Toguchi to continue to receive the benefits in the belief that the base project will go ahead no matter what.

Having a mayor who would not be drawn on his position to the U.S. base issue, simply to ensure the Henoko project would not become a key topic in the election, is a product of the ruling camp’s approach to the policy challenge. The government has adamantly stuck to the Henoko plan and the ruling coalition of the Liberal Democratic Party and its junior partner, Komeito, supported its strong-arm policy.

The outlook of the work to build a new airfield off Henoko became murky after a large swath of weak seabed was found in the planned reclamation area. The rationale for the decision by the Japanese and U.S. governments to relocate the Futenma air base was to eliminate the safety threat posed by the base’s current location in a densely populated residential area. But that has been left in limbo. These grim realities have not stopped the government.

Kishida has pledged to pursue a foreign and security policy that stands for the people. As this year marks the 50th anniversary of the prefecture’s return to Japan in 1972, after nearly three decades of U.S. rule, the administration should use the occasion to reflect on Okinawa’s history of suffering and make more aggressive efforts to fundamentally reduce the heavy burden of the heavy U.S. military presence in Okinawa to allay related anxieties among the residents there.