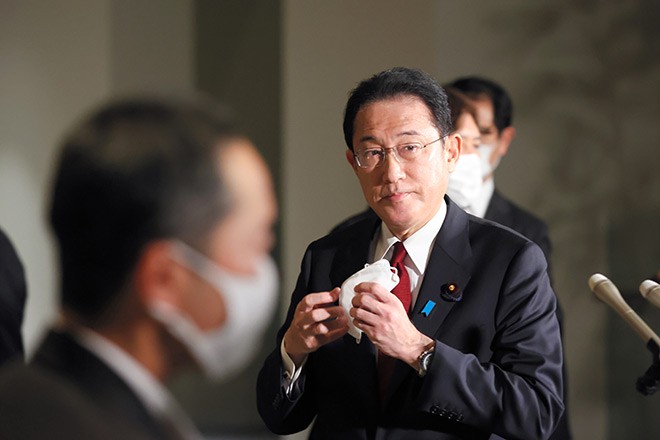 Prime Minister Fumio Kishida answers questions from reporters on Jan. 24 after the government decided to add 18 prefectures to the list for pre-emergency measures to fight the novel coronavirus. (Koichi Ueda)

Forty-five percent of voters approved the government’s response to the COVID-19 pandemic, down 6 percentage points but still higher than the 38 percent who disapproved of its anti-virus measures, an Asahi Shimbun survey found.

The ratio of those giving low marks was up by 2 points from the previous survey taken in December.

The latest survey, conducted on Jan. 22 and 23, shows that 41 percent of voters feel that Prime Minister Fumio Kishida is showing leadership in tackling the public health crisis, compared with 37 percent who think he is failing in this department.

In the survey conducted in January 2021, only 15 percent of voters rated highly the leadership of then Prime Minister Yoshihide Suga in fighting the pandemic, compared with 73 percent who gave the opposite assessment.

The sixth wave of infections is now spreading across Japan, led by the highly contagious Omicron variant, and many prefectures are registering record numbers of new COVID-19 cases each day.

But voters appear less anxious now than they were during the fifth wave of infections fueled by the Delta variant last summer.

The latest survey found that 69 percent of respondents “greatly” or “somewhat” fear they may be denied access to medical care if they become infected, while 29 percent had “no” or “not much” fear about this.

In the survey taken on Sept. 11 and 12, after the peak of the fifth wave, 82 percent said they were “greatly” or “somewhat” worried about being unable to get hospital treatment if they tested positive for the virus.

According to the latest survey, 28 percent of voters feel the threat of the Omicron variant is “more serious than before,” 39 percent think the threat level is “the same as before,” and 31 percent believe it is “not so serious as before.” They were asked to choose one of the three answers.

But respondents in Tokyo and Osaka showed a sharp discrepancy in the threat level of Omicron. Twenty-five percent in the capital felt it was “not so serious as before,” while the figure was 45 percent in Osaka.

Sixty-seven percent of respondents said the pre-emergency measures applied to Tokyo and 15 prefectures earlier this month to slow the spread of the novel coronavirus were “insufficient,” while 20 percent replied the opposite.

Voters also gave low marks to the government over the cluster infections that have occurred at U.S. military facilities, particularly in Okinawa and Yamaguchi prefectures, since mid-December and spread to the local populations.

Japanese government officials said they have repeatedly urged the U.S. military rein in the contagion.

Only 15 percent of respondents gave high marks for this action, while 69 percent disapproved.

As for the infrastructure ministry’s falsification of data regarding construction contracts that are used to calculate the nation’s gross domestic product, 72 percent of respondents called for Kishida to make more efforts to get to the bottom of the issue, compared with 14 percent who said there was no need to do so.

The survey found that 73 percent of voters who support the Kishida Cabinet want a further investigation into the data scandal.

Regrading Japan’s decision not to send government officials or diplomats to the Beijing Olympics and Paralympics, 67 percent gave a thumbs-up while 14 percent disapproved of the move.

The approval rating for the Kishida Cabinet came to 49 percent, unchanged from the poll in December. The disapproval rate dipped by 2 points to 21 percent.

The poll received 527 replies after contacting 1,028 households with at least one voter. Among mobile phone users, 1,000 gave valid responses out of 2,198 voters contacted.