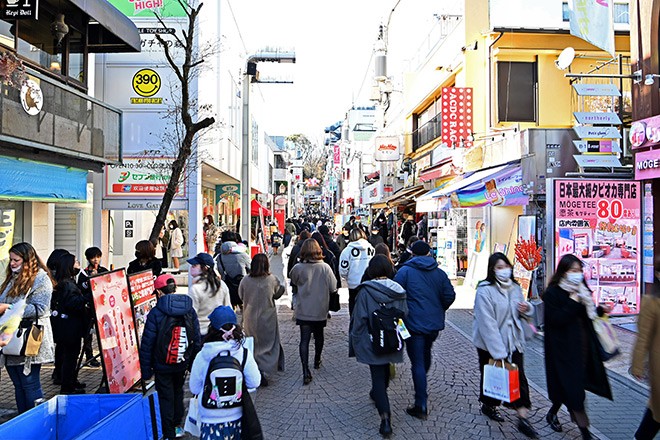 Pedestrians on the Takeshita-dori street in Tokyo’s Harajuku district on Jan. 22, the first weekend after pre-emergency measures were put in place (Yosuke Fukudome)

The sixth wave of infections showed no signs of slowing on Jan. 25, when single-day records for new infections were set all around Japan, including 12,813 fresh COVID-19 cases confirmed in Tokyo.

The tally in the capital was about 2.4 times the number for the previous Tuesday. It brought the daily average for the week until Jan. 25 up to 9,675, compared with the average of 3,858.6 for the preceding week, metropolitan health officials said.

There were no new COVID-19-related deaths, according to the officials.

The daily average of COVID-19 tests conducted over three days through Jan. 24 was 20,240 in Tokyo.

The number of patients in serious condition, defined by the metropolitan government as requiring a ventilator or ECMO heart-lung bypass machine, rose by two to 14, they said.

But that figure would be much higher if it included patients in ICUs in line with the central government’s definition of serious cases.

The occupancy rate of hospital beds in Tokyo stood at 39.8 percent, still below the 50-percent threshold where metropolitan officials would consider asking the central government to declare a state of emergency.

Osaka Prefecture also posted a high of 8,612 newly confirmed infections on Jan. 25, smashing the previous record of 7,375 set on Jan. 22.

Up north, Hokkaido reported 1,536 new cases, the seventh straight day the count has surpassed 1,000, but it was not a record.