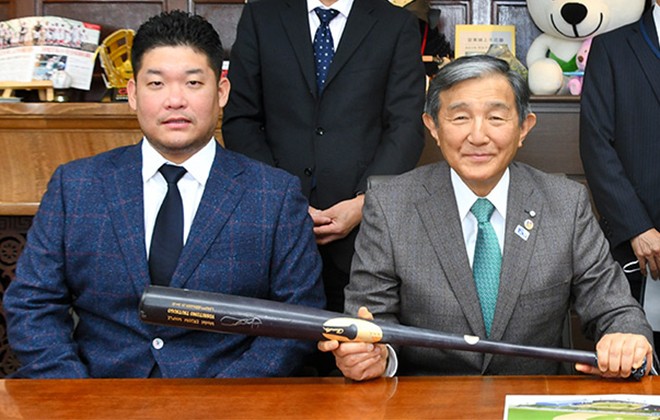 Yoshitomo Tsutsugo, an outfielder with the Pittsburgh Pirates, wants to change how children usually play baseball in Japan, including the field.

The major leaguer is spending 200 million yen ($1.76 million) of his own money to build a natural grass baseball facility in his hometown of Hashimoto, Wakayama Prefecture.

“In addition to a baseball field with dimensions of 100 meters to left and right fields, I’m planning to build a half field and a small gymnasium,” the 30-year-old said during an online news conference on Jan. 22. “I want natural turf on the baseball field and the half field so that children can go after the ball as hard as they want.”

Tsutsugo said that using natural grass instead of the ubiquitous artificial turf was one of the things he was most fastidious about when planning the ballpark.

He was inspired when he saw children playing baseball in the dirt and natural grass at a stadium in the Dominican Republic that he visited during the Winter League in 2015.

“When I play in the United States, the ball often bounces irregularly on natural grass,” Tsutsugo said. “Players must predict the unpredictable when they take the field, so it helps them to think ahead. It also reduces strain on the body (compared to artificial turf).”

He also thought natural grass would help young players who are seeking to reach a higher level.

The planned facility will have a total space of about 30,000 square meters, with the baseball field scheduled to be completed by the end of this year. An indoor practice area, which measures 25 meters by 25 meters, was recently completed.

Tsutsugo, who previously starred with the Yokohama BayStars, will also found the Tsutsugo Sports Academy to provide after-school care services and sports classes for children. And he plans to build a baseball team of elementary school children.

In recent off-seasons, Tsutsugo has made recommendations about young players to baseball circles in Japan.

He advocates a break from the “win-at-all-costs” mentality and argues that allowing high school students to use metal bats hampers improvements in their batting skills.

Tsutsugo also said he is worried about children suffering injuries from practicing too much.

He said it is more important to provide a relaxing environment for children to enjoy sports than to teach them detailed techniques though grueling training.

Tsutsugo believes that more enjoyable environments will encourage children to think and act on their own.

He said he will continue discussions with his supporters to determine the principles of the academy, but he already has a clear vision about its goals.

“I hope many people will play active roles in the world after learning (baseball) here,” he said. “And I want to make the academy into something that inspires many people to want to live in Hashimoto and stimulate the city, helping Wakayama Prefecture produce wonderful children and promising talent.”