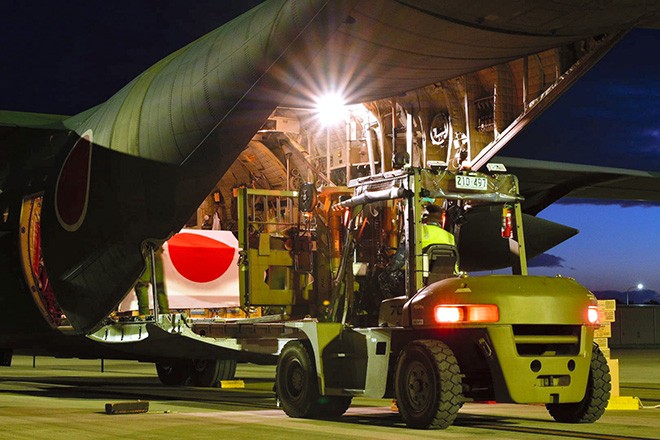 An Air Self-Defense Force Lockheed C-130 Hercules transport aircraft carrying relief supplies to disaster-hit Tonga arrives at an Australian air force base in the eastern part of the country on Jan. 21. (Provided by the Defense Ministry’s Joint Staff)

The Defense Ministry said Jan. 25 it can no longer secure sufficient personnel for the mission as 36 other ASDF members on deployment are suspected of having come into close contact with the four infected individuals now self-isolating.

The ministry said it has no idea when it can resume flights to provide drinking water and other supplies to Tonga, which declared a state of emergency after a massive eruption of an underwater volcano.

One of the four members was on a Lockheed C-130 Hercules transport aircraft that delivered drinking water to Tonga on Jan. 22, according to the ministry.

After returning to Australia, the individual began running a fever on Jan. 24 and tested positive for COVID-19. That person, along with 21 others thought to have come into close contact, are self-isolating at a local accommodation facility.

The ministry also disclosed that three ASDF members who flew on another C-130 aircraft on the same mission complained of a fever and other symptoms on Jan. 25 following their return to Australia the day before. The three were later confirmed to be infected with the virus and are self-isolating along with 15 suspected close contacts.