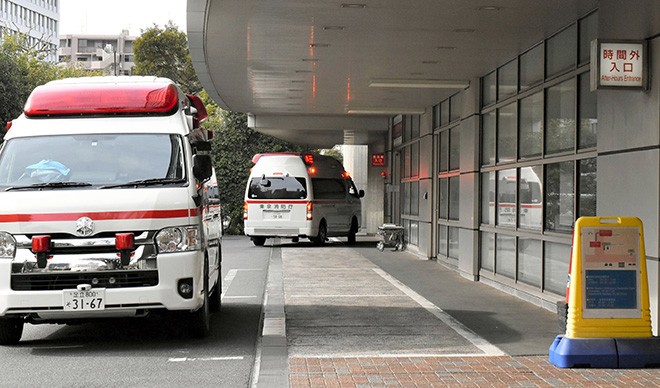 Ambulances transport patients to the initial response room of the Center Hospital of the National Center for Global Health and Medicine in Tokyo. (Yoshinori Hayashi)

In a repeat from previous infection waves, hospitals are again facing difficulties admitting emergency patients because more beds have been set aside for COVID-19 patients.

But the situation appears even worse this time around.

In those cases, the ambulance workers spent at least half an hour at the location where they picked up the individual in response to an emergency phone call, and they contacted at least four medical institutions.

Emergency calls generally increase in number in winter, when more people suffer from heart disease and pneumonia as well as falls on icy sidewalks.

A Tokyo woman in her 90s broke her thigh bone and was rushed to a university hospital this month. But doctors there said no beds were available in the surgery department.

“Surgery and rehabilitation are needed for patients with broken bones, so many cases involve hospitalization of about a month,” said Akio Tsuchiya, an orthopedic surgeon who heads Kasai Central Hospital. “The situation will likely continue to be difficult in admitting new patients.”

According to the FDMA, 1,416 of those 4,950 emergency cases involved individuals suspected of having COVID-19. The figure was the fourth highest ever.

The FDMA has been collecting statistics about problems in finding available hospitals for emergency patients since April 2020. The numbers have closely matched the rise and fall of new COVID-19 cases.

The Center Hospital of the National Center for Global Health and Medicine located in Tokyo’s Shinjuku Ward is one of the major emergency care facilities in the capital.

But on the afternoon of Jan. 24, the six booths set aside to diagnose emergency patients as well as the two beds to treat such patients were all taken.

Rescue workers transported patients from ambulances even while medical staff were treating others who had suffered strokes and other life-threatening illnesses.

“With the increasing number of emergency patients being brought in, our beds for other medical care are completely taken,” said Akio Kimura, who heads the Department of Emergency Medicine and Critical Care at the center hospital.

With more hospitals setting aside beds to treat COVID-19 patients, many have been forced to reduce admissions for other departments.

When all beds at the center hospital for emergency patients were filled, doctors had to treat patients in the ambulances that had brought them there.

“There was one patient who had to wait five hours in the ambulance before being admitted here,” Kimura said. “The situation might arise of not being able to immediately admit patients with acute cases of stroke or cardiac disorders.”

The health ministry issued a directive to prefectural governments on Jan. 20 allowing medical institutions to admit emergency patients in wards set aside for COVID-19 patients.

But emergency medicine doctors said it would be difficult to convert such ward beds for emergency patients because of the need to clearly keep COVID-19 patients away from other patients in the hospital.