62.6 million yen average price for a condo in Tokyo area 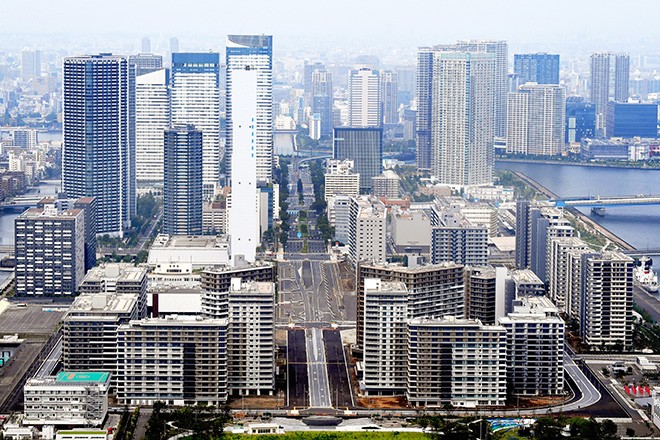 The Harumi area in the capital’s Chuo Ward, the site of the Tokyo Olympic Village, is dotted with high-rise apartment buildings. Photo taken in 2020 (Asahi Shimbun file photo)

The average price of a new apartment in the Tokyo metropolitan area in 2021 hit 62.6 million yen ($550,000), smashing the record set at the peak of the asset-inflated economy three decades ago.

The figure was also up 2.9 percent from the previous year, according to Real Estate Economic Institute Co. (REEI). The previous record, 61.23 million yen, had stood since 1990.

REEI, which started tallying the annual average figure in 1973, said Jan. 25 that prices were driven up by investors and wealthy dual-income households.

The rate at which contracts for new offerings were signed in the months when their sales started topped 70 percent for the first time in six years. Highly sought-after apartment units were sold as soon as they were released.

Investors and wealthy people are increasingly buying property in the Tokyo area, REEI said, adding that dual-income households with high earnings, or “power couples,” were helping to fuel the boom.

Mitsui Fudosan Co., which is constructing Park Tower Kachidoki in the capital’s Chuo Ward, said most of the units are priced in the range of 90 million yen to below 100 million yen. It said that around 1,900 people, many of them dual-income couples in their 30s or 40s, applied to purchase 678 units released in 2021.

Nomura Real Estate Development Co., led by its “proud” brand, is constructing apartment buildings in Tokyo’s Kameido district with unit prices mainly based at between 70 million yen and less than 90 million yen. Units are selling 30 percent faster than expected, a company representative said.

“The COVID-19 pandemic caused more people to spend time at home, which made them more persistent or passionate about where they live,” the official said.

The accelerated pace of interest also reflects a shift in focus by real-estate companies to more expensive properties.

The number of apartment units offered in 2021 totaled 33,636 in the entire greater Tokyo area, up 20 percent over the preceding year when sales stagnated due to the health crisis.

The latest figure represents just 30 percent of the peak reached in 2000. Tokyo’s 23 wards, where many expensive apartment units are on sale, accounted for about 40 percent of the total.

In light of the nation’s declining population, real-estate companies are increasingly pitching properties in the Tokyo area because they know they will sell quickly.

“Land prices and construction costs continue to be high,” said Tadashi Matsuda, a chief researcher of REEI. “If customers continue to be in such a rush to buy property, the trend of higher prices will go on for longer.”