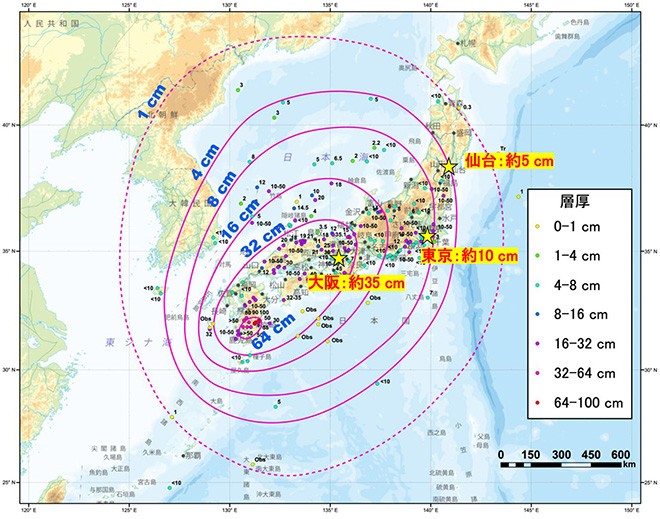 A map shows the range of volcanic ash spewed out from the Aira caldera 30,000 years ago. (Provided by AIST)

A volcanic eruption in southern Japan 30,000 years ago was so massive it dumped a 10-centimeter layer of ash in what is now the sprawling metropolis of Tokyo, according to researchers.

A team at the National Institute of Advanced Industrial Science and Technology (AIST) made the finding with a simulation while re-examining huge eruptions in the distant past, which although rare, had devastating consequences for the environment.

The pyroclastic flow and volcanic ash spewed out by the Aira caldera in southern Kagoshima Prefecture in Kyushu was 1.5 times larger than previous research estimates and reached a depth of about 100 meters once it cooled, the team said.

AIST researchers have been re-examining eruptions of 6 or higher on the volcanic explosivity index (VEI) since the magnitude-9.0 Great East Japan Earthquake in 2011. An eruption registering 6 on the VEI scale is regarded as “colossal.”

The team members spent two years or so looking at strata in and outside Kagoshima Prefecture. They also combed through past data to simulate the pyroclastic flow that reached the ocean 30,000 years ago.

The so-called Ito pyroclastic flow was calculated as having spread out from the Aira caldera up to a radius of 100 kilometers. A 100-meter-high pyroclastic flow rained down on the area now occupied by Kagoshima city, which lies very close to the caldera.

Kyushu Electric Power Co., which operates the plant, said it would take the results of the AIST study into account when it considers new safety measures.

The simulation found that pyroclastic flows of between 40 and 50 meters in thickness reached the East China Sea, while flows in the 30-meter range raced to the Pacific coast.

Volcanic ash piled up to a height of about 64 centimeters in and around Kagoshima and even 5 cm in Sendai in the Tohoku region of northeastern Japan. Ash that fell in Osaka reached 35 cm.

The figure is close to the 1 trillion cubic meters estimated to have come from the Aso caldera in Kumamoto Prefecture about 90,000 years ago. That eruption is classified as an 8 on the VEI, making it a “mega-colossal” eruption.

AIST officials said the research results could be used to gauge the impact of a future massive eruption at the Aira caldera. They noted that pyroclastic flow sediment on mountain slopes is helpful in assessing landslide risks.