Taiwan has not been asked to change name of Lithuania office 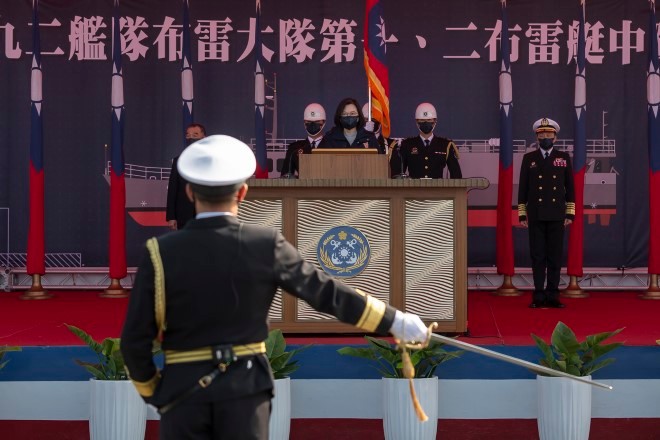 TAIPEI/WASHINGTON--Taiwan has not received a request to change the name of its de facto embassy in Lithuania, its foreign ministry said on Wednesday, after Reuters reported that Lithuanian officials were discussing whether to ask Taiwan to modify the name.

Separately, a senior U.S. administration official told Reuters that Washington had not pressured the European country to change course in any way, following a Financial Times report last week that said the United States had suggested the name change.

Taiwan, the self-ruled island that China views as part of its territory, opened the office last year called the Taiwanese Representative Office in Lithuania, rather than using the word Taipei as is more common.

Beijing, angered by the move, has downgraded its diplomatic relationship with Lithuania and pressed multinationals to sever ties with the country or face exclusion from its market.

Modifying the Chinese version of the representation name to refer to “Taiwanese people” rather than to Taiwan was last week proposed by Lithuanian Foreign Minister Gabrielius Landsbergis to President Gitanas Nauseda as a way to reduce the tensions with China, sources said.

Taiwan’s Foreign Ministry said there has been no request to change the name.

“Neither our country’s Taiwanese Representative Office in Lithuania nor the Foreign Ministry has ever received a request from the Lithuanian government to change the Chinese or English name,” it said.

The office’s name was set during bilateral consultations and there has been no change in Taiwan and Lithuania’s positions that they would continue to strengthen relations, the ministry added.

“Taiwan and Lithuania are important partners who share the values ​​of freedom and democracy,” it said.

Lithuania, like most countries, has no formal diplomatic ties with Taiwan, and China routinely objects to any moves that suggests Taiwan is its own country.

Since Vilnius’ move to open the office, Lithuanian officials have complained of Chinese retaliation, and Washington has stepped up economic and diplomatic support for the Baltic country. The senior U.S. official said the U.S. government had not pressured Lithuania to reverse course after its decision last year to refer to Taiwan in the name of the office.

“It is their right to make these decisions as a sovereign nation. The suggestion that we would be pressuring them to somehow change the name is fundamentally at odds with our entire position,” the official said.

“I have not seen at any point, even under consideration let alone being deployed in any sort of official messaging, some sort of threat about a limit to what (support) we may be able to offer unless somebody changed course. That’s not even been on the table,” the official said.

“European solidarity” on the issue was crucial, the official added.