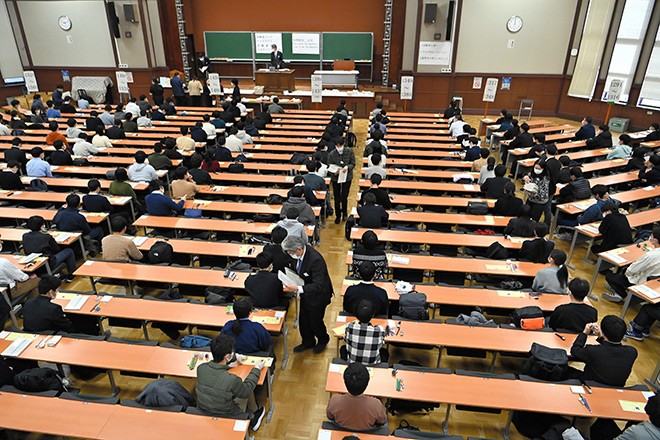 Students take a unified university entrance exam on the campus of the University of Tokyo in the capital’s Bunkyo Ward on Jan. 15. (Yosuke Fukudome)

A 19-year-old female student has admitted to cheating on a unified university entrance exam by using an electronic device to leak questions and gain outside help, sources said Jan. 27.

She surrendered to police in Kagawa Prefecture after news of the cheating scandal spread around the nation.

Tokyo police are expected to question her on suspicion of fraudulent obstruction of business.

The National Center for University Entrance Examinations had requested the Metropolitan Police Department to investigate the case.

According to sources, a test-taker asked at least two university students for help with the “World History B” exam through an electronic device on Jan. 15.

Around 30 pictures of the exam questions were sent via the Skype communication app to two students who attend the University of Tokyo and were outside the exam venue, the center and the education ministry said.

One of the university students sent an answer to the test-taker.

Police interviewed the two students on Jan. 26. They said they became acquainted with the “test-taker” who was identified as “a female student preparing to take a university entrance exam” through a tutor-matching website, investigative sources said.

The female student said she would send them questions “to test your tutoring abilities,” they said.

They received multiple pictures of the exam questions around 11 a.m. on Jan. 15, about 40 minutes before the World History B exam was scheduled to end, sources said.

After the World History B exam wrapped up, the two students received another message around noon: “Japanese classics and Chinese classics are next. Thank you in advance.”

The “Japanese Language” exam was held after the “World History B” exam, the center said.

A little past 1 p.m., they received a text that said: “No need to do Japanese and Chinese classics for now. Thank you.”

Investigative sources said at least two other university students had been contacted apparently by the same test-taker before the exam and were asked to solve exam questions in a similar way.

One of those students declined the request, the sources said.

The two University of Tokyo students realized that the questions in the pictures were identical to ones on the World History B exam, the sources said.

A person who runs the tutor matching website quoted a university student registered on the site as saying, “I may have been involved in cheating.”

The operator suspended the account of the “test-taker” and warned multiple registered lecturers not to respond if they received similar requests for help.

The operator also sent an email to the “test-taker” to check the facts of the cheating allegations but has received no reply.

“It is extremely regrettable if our service has been abused for cheating,” the operator said.

According to the center, test-takers can bring electronic devices, such as smartphones, into an exam room but they are not allowed to use them during the exam. They are also prohibited from leaking questions from a unified university entrance exam, the center said.

Before each exam begins, the test-takers are asked to place all electronic devices on a table, turn them off and put them in a bag.

Wearing an electronic device or holding one during an exam is considered cheating.

But the center said this could be the first case in which exam questions were leaked through an electronic device.
A supplementary unified university entrance exam is scheduled for Jan. 29 and 30.

A senior official of the education ministry said it “will check the facts of the case and respond.”