Kishida loses his cool over slow progress in booster rollout 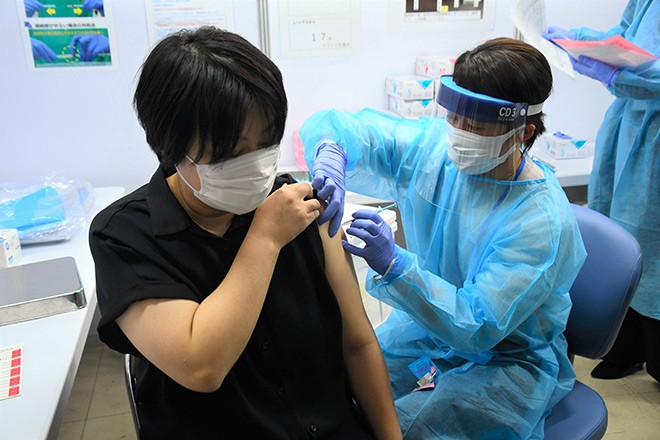 Prime Minister Fumio Kishida is clearly feeling the pressure. Exasperated by the slow rollout of COVID-19 booster shots, he barked at aides to hurry things up during a briefing session in his office in mid-January.

Those close to Kishida said it was an uncharacteristic outburst.

His annoyance stemmed from the fact that of the 14.7 million people eligible for a third jab by the end of January, a mere 2.36 million had received one, putting the inoculation rate at around 16 percent as of Jan. 24, according to the Ministry of Health, Labor and Welfare.

“(The booster campaign) isn’t progressing fast at all. Why can’t we accelerate it?” Kishida, in a raised voice, asked during the briefing session held just after the government decided to declare pre-emergency measures for Tokyo and 12 prefectures.

There are two reasons for the slow progress.

The first is that many local authorities were caught off guard by the government’s abrupt decision last month to slash the interval for follow-up COVID-19 shots from eight months to administer third doses.

On Jan. 18, Tokyo’s Koto Ward started administering booster shots to elderly people who are not in residential care facilities. It also, considerably earlier than it had planned, began mailing out vaccine vouchers to residents aged 64 or younger so they can receive third jabs from Feb. 2, which will ensure a six-month interval has passed since their last shot.

“Even if we have enough doses of vaccine, we still need to secure staff and venues,” said a ward office official. “In addition, some people cannot receive booster shots any time soon because their health condition has changed or for reasons related to another vaccine they took.”

“We can meet the deadline if we give booster shots to 1 million people a day,” said a senior government official bullishly. Currently, about 200,000 people are receiving third doses each day.

The second reason concerns those who have an aversion to “mixing and matching” vaccines, namely getting a booster shot manufactured by a company different to the one that was responsible for the first and second doses.

The Moderna vaccine accounts for around 60 percent of booster doses secured by the government.

Officials expressed concern that people might want to avoid the Moderna vaccine following reports of side-effects among many individuals who received it as their second jab.

“The take-up of booster jabs is slow among the elderly because they want to receive the Pfizer vaccine,” a key official at the prime minister’s office stated bluntly.

To turn the tide, it was decided to mount a campaign featuring Kishida. “I would like to receive the Moderna vaccine as my booster shot,” he said to reporters Jan. 24.

Officials are trying to promote the “mixing and matching” approach by explaining the Pfizer vaccine was used for Kishida’s first and second shots.

“All we can do at present is to urge people to get booster shots soon,” said a government official.

As this comment shows, the government has yet to find an effective solution to the holdup.

(This article was written by Junya Sakamoto and Aya Shioiri.)