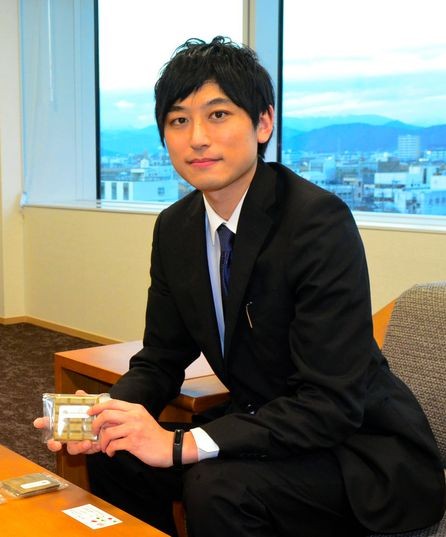 GIFU--Kosei Nakamura took pity on patients when he learned three years ago about an intractable skin disease that made it painful for them to eat.

So, he set upon developing the "world's friendliest chocolate" as a student, for a taste treat that would literally melt in the mouth.

Nakamura, who hails from Gifu and is in his fifth year at Hokkaido University’s School of Medicine, set up the production and retailing company SpinLife Inc. To date, a total of more than 10,000 pieces of his brainchild have been sold.

“I wanted to create a mechanism where people can gain a better understanding of those from minority groups,” said Nakamura. “I would like both healthy individuals and patients with the disease to have the candy together. I believe the chocolate will be able to change the world dramatically.”

Nakamura, 26, who graduated from Gifu Prefecture-run Kano High School, entered the University of Toyama’s School of Pharmacy and Pharmaceutical Sciences and then was admitted into Hokkaido University’s School of Medicine to become a surgeon.

Three years ago, Nakamura became acquainted with epidermolysis bullosa, a rare disease associated with acute pain, and started providing support as a volunteer for a group of individuals with the disorder.

The painful congenital symptom is marked by the skin ripping off easily. If the body surface is rubbed, blisters will arise not only on the skin but also in the mouth under the condition.

After Nakamura heard a person troubled by the disease say “eating potato chips brings such terrible pain that I feel as if I have thorns in my mouth,” he began seeking a way to “allow patients to ingest nutrients comfortably as they face dietary limitations.”

Based on his experience of having struggled to determine what irritates patients while studying a therapeutic agent for spinal cord injuries at the University of Toyama, Nakamura created and tested samples, including a croquette, fried chicken and corn soup, from the sufferers’ standpoint.

Nakamura made up his mind to make a sweet concoction when he was exhausted by his experiments and tried to pick up a chocolate in front of him.

While researching organ transplantations and cerebral tumors at Hokkaido University, he established a company in January 2020 to manufacture and sell a chocolate deemed friendly to epidermolysis bullosa patients. He even hired a dedicated chocolatier and pastry chef.

Nakamura devoted much energy to create a chocolate that melts smoothly in the mouth.

In the recipe, cacaos, almonds, soybean flour, coconuts, green tea, “konbu” kelp and other ingredients are blended slowly for 48 hours.

Nakamura stated that special attention is also paid to the temperature management process, known as chocolate tempering, to finish the confectionery, so that a satisfying level of easiness to melt can be realized.

According to such sources as the nonprofit group DebRA Japan, an advocate for those with epidermolysis bullosa, the mucous membranes in the gullets narrow in patients, making it difficult for them to swallow food.

This condition is described by patients as being more severe than skin pain. Children suffering from the symptom often cannot take in nutrients, resulting in lower heights and weights along with difficulties in school enrollment and stable employment.

“Patients have blisters in their mouths and cannot chew strongly, so it is painful to take in nutritional elements through their mouths,” said Miyamoto. “The chocolate is best suited for consumption at a time they are a little hungry.”

Marketed in May 2020 on the internet and elsewhere, the confection relies only on plant-derived materials and is free from refined sugar, preservatives, emulsifiers or aromatics.

It is billed as a “perfect food” because the chocolate comprises proteins, minerals, vitamins and other nutrients in a balanced fashion.

Nakamura is looking to have his brainchild covered by public health insurance as a quick nutritional fix in the future for an estimated 2,000 people afflicted with epidermolysis bullosa across Japan.

The confectionery product comes in five flavors. While standard and non-sugar types are available, the other three kinds are characterized by green tea, fruits and soybean flour.