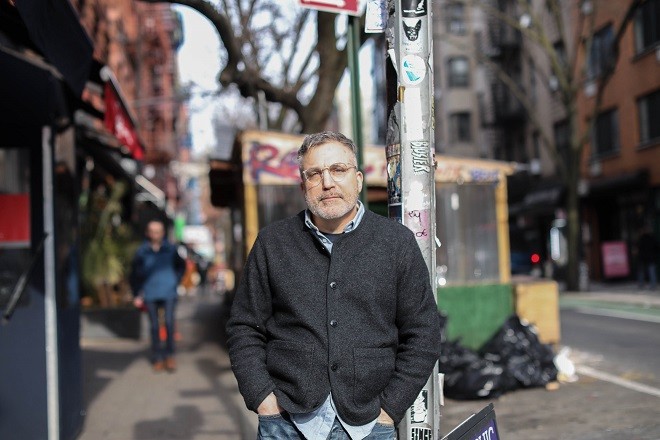 He moved to a house in Westchester in upstate New York, an hour’s drive from his childhood home on Long Island, opening an outpost of Ivan Ramen, now closed, in a midtown Manhattan market. Later, he opened a shop on the Lower East Side, where he toils to this day.

And each day, Orkin--who is 58 and wears chic metal-framed glasses below his short, dark hair, graying on the sides--studies Japanese. In November, he took up the practice, the first time since college, reflecting his devotion, if not an outright obsession, with Japan.

“I am not done with Japan,” he said recently, his voice firm and eager. “I’m reading and studying. I’m so into it.” He then added, “I can’t wait to get back to Tokyo.”

In 2007, when Orkin was “a little bit aimless” and not yet the foul-mouthed disciple of the ramen world he is today, he opened Ivan Ramen in a sleepy “shotengai” shopping street off the Keio Line in Tokyo’s Setagaya Ward.

Though most ramen shops in Tokyo bought their noodles premade, he made his by hand. He spent hour after hour experimenting in a noodle room filled with a table and bins of flour, the air often punctuated by music of The Grateful Dead and the smell of freshly brewed coffee.

As one of the first, if not the first, foreigners to open a ramen shop in Tokyo, he soon found fame for his ramen’s thin but firm noodles and light broth and for his “go f--- yourself,” New York persona.

“I’m a New Yorker, and I’m pretty brash,” he said. “Even though I’m very polite in my Japanese, if someone pissed me off, I would tell them, ‘You’re pissing me off.’”

When speaking with Orkin, his sentences filled with vivid imagery and expletives, his accent unmistakably formed in New York, he explains that he is a Japanophile before a ramen geek. Japan has been his passion since he was young: at the age of 15, he worked in a sushi restaurant; in college, he studied Japanese, teaching English in Japan soon after graduation; Orkin raised his kids bilingual and bicultural, between Tokyo and New York.

It is then no surprise that he calls Ivan Ramen an “anthropological exploration.” It was an excuse to live and work in Tokyo, to speak Japanese all day, and, as he said, “to use all the things I learned about the culture to try to open a successful business.”

And he made a confession: “None of it had anything to do with ramen really. Ramen was the vehicle to explore the things about Japan that I really love.”

On returning to the United States in the early 2010s and opening stateside outposts of Ivan Ramen in New York, he set out to share his passion for Japan. And the vehicle? A bowl of noodles and broth, layered with flavor. And, in his own way, he has risen to become one of America’s pre-eminent, if unlikely, ambassadors of Japanese cuisine and culture.

Orkin estimates that thousands of individuals have visited Japan after eating his ramen in New York; countless more have been influenced by watching the episode of Netflix’s “Chef’s Table” devoted to his life.

“A lot of people get really inspired, and they just want to go to Japan so badly, and they want to learn more about Japan and want to eat more ramen,” Orkin said.

But he is not pretentious about his knowledge or experiences, aware that he is a foreigner sharing a culture that is not his own but one he has come to know and adore.

As he said with a slight quiet, a humble inflection in his voice, “I didn’t come back and say I’m Ivan and … I’m going to show New York what good ramen is.”

Rather, he set out to create accessible food, made how he liked it: ramen layered with chicken fat and garlic; noodles with a bite; small, reimaged Japanese dishes such as fried tofu topped with miso mushroom chili and mustard (what he calls the Tofu Coney Island).

And for the sleek yet welcoming space on the Lower East Side, Ivan Ramen’s flagship spot, he took cues from the city’s diners--homey, 24-hour joints that sling omelets and burgers. Stools are bolted into the floor. The walls are plastered with art; a kitschy cartoon of characters slurping ramen hangs behind the bar. The space and food are distinctly his.

In recent years, he has expanded his operation across the United States, selling boxes of ramen ingredients on the online food marketplace Goldbelly; a franchise model is also in the works. He temporarily opened ghost kitchens in Nebraska and Texas in 2021.

It all returns to his love of Japan. And Orkin is unapologetic. He tells me with pride and force that his experiences slinging ramen on the small shotengai in Tokyo can never be taken away.

“I did what I did. You cannot like me. You can be jealous of me. You can think I’m a poser,” he said. “But, you know, I can prove that I had a ramen shop in Tokyo. And that it was successful.”

Spencer Cohen is a staff reporter at The Asahi Shimbun’s New York Bureau.