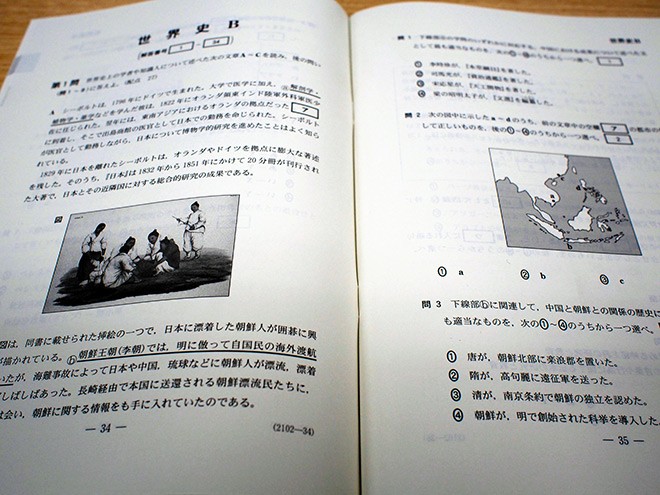 Questions for “World History B” in this year’s unified university entrance exam conducted on Jan. 15 (The Asahi Shimbun)

I was stunned by the extraordinary meticulousness with which a test-taker tried to cheat on a unified university entrance exam on Jan. 15.

The perpetrator apparently chose unwitting accomplices through a tutor-matching website, told them to be on standby at a designated time and sent questions secretly photographed at the exam site for them to solve.

The test-taker tried to cheat on several subjects, including world history and English.

The trick looked like coordinating a work project with the intent of outsourcing its execution.

The internet has made it easier today to commission people far away to perform tasks.

One example would be U.S. corporations subcontracting programming to IT engineers in India.

It helps keep labor costs down, aside from the obvious convenience of being able to receive a finished product by the next morning for an order placed in the evening in the United States.

In the latest cheating case, university students were told to get the job done for free, ostensibly to confirm their tutoring abilities.

It appears the culprit also intended to save on something else: the time and effort to prepare for the exam, such as expanding one's English vocabulary.

But was that worth the time spent on planning the scam and the risk of getting caught while taking photographs of questions?

American anthropologist David Graeber (1961-2020) argued that advances in science and technology have given rise to meaningless jobs, including “taskmasters,” who just assign work to others.

It feels as if the test-taker mimicked this type of job.

The case awaits investigation, but one thing we should bear in mind is that digital technology tends to spawn innovations of the wrong sort.