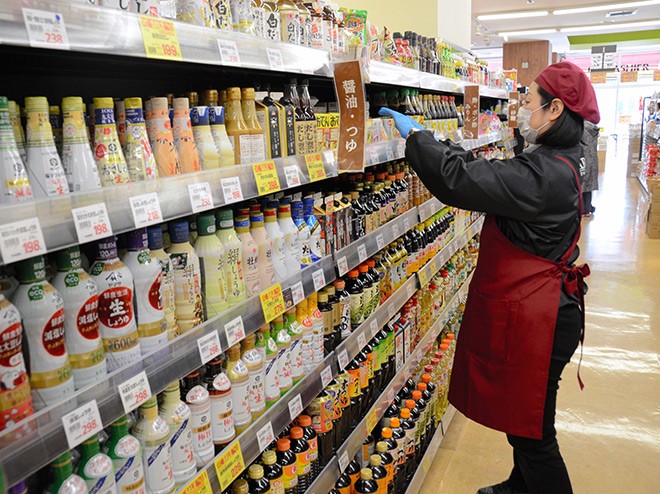 A supermarket employee straightens a shelf lined with soy sauce products in Yokohama’s Totsuka Ward. Soy sauce makers are planning to raise the price of their products en masse in February and onward. (Yuji Yamashita)

Consumers should brace themselves for rising prices starting in February, resulting in tighter household budgets and lighter wallets.

The increases will cover a wide range of items essential to daily life, from seasonings and staple foods to commodities such as toilet paper and utilities including electricity and natural gas.

They are part of the latest round of higher prices that began last year and threatens the country’s economic recovery from the COVID-19 pandemic.

Among the items for which prices will increase in February are regulars on the kitchen table: soy sauce, mayonnaise, pasta, udon noodles, ham and sausages.

A combination of factors is behind the rise in prices.

Demand for goods is heightening worldwide due to China’s economic expansion, along with the economic recovery in the United States and in many European countries after languishing in a pandemic-induced downturn.

But supply chains have been unable to catch up with demand because of a poor harvest, a labor crunch and a shortfall of shipping containers brought on by the ongoing global health crisis.

Crude oil prices have been trending upward, worsening the problem.

On top of the inflationary pressure being felt around the world, it is proving more costly for Japan to import ingredients and raw materials that the country relies on heavily because of the depreciating yen since last year.

Domestic manufacturers have eaten the extra costs and opted against raising prices for their products out of fear that consumers might close their wallets.

But they now feel it is no longer possible to stave off price increases through their efforts alone.

“We have no choice but to hike prices as a sharp rise in raw materials is spreading across the world,” said Ken Ikemi, president of Maruha Nichiro Corp., a leading food manufacturer, of its frozen foods.

Their prices will go up from 2 to 23 percent.

Soy sauce producers Kikkoman Corp. and Yamasa Corp. will increase the prices of their products between 4 and 10 percent in the first such hike in 14 years.

The economic burden on a single household is estimated at 28,000 yen ($243) a year if the consumer price index, which represents the overall trend in prices for all goods, edges up by 1 percent, according to Taro Saito, head of NLI Research Institute’s economic research department.

The consumer price index rose by 0.8 percent year-on-year in December 2021.

The figure is likely to reach nearly 2 percent in April, according to Sato.

Prices for some goods from February and thereafter will even go up by 10-20 percent.

“If prices for goods that consumers often buy every day go up, the effect on consumers will be greater than the increase itself,” he said.

Price hikes across a wide array of products this year might not weigh on consumers if they earned more year after year commensurately.

But this has not been the case for Japanese workers in recent years.

According to one comparison of wages with consumer prices, salaries did not increase in step with the cost of goods.

As a result, the shrinking pool of disposable income due to price hikes could derail Japan’s economic recovery efforts in the mid- and long-term, according to Saito.

“When movement restrictions are lifted after the country overcomes the pandemic, consumers will feel that they have been left with less money to spend due to the surging prices,” he said.

(This article was compiled from reports by Yuji Yamashita, Kyosuke Yamamoto and Shinya Tokushima.)