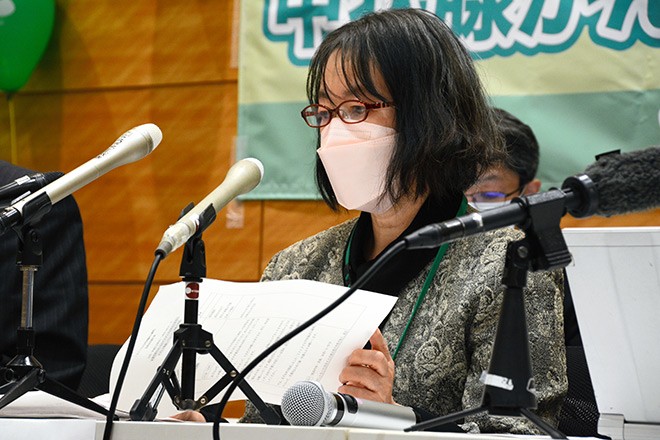 The mother of a male plaintiff who was diagnosed with thyroid cancer after the 2011 nuclear accident in Fukushima Prefecture speaks at a news conference on Jan. 27. (Yuri Murakami)

The plaintiffs, aged between 17 and 27, were living in the prefecture at the time of the Fukushima No. 1 nuclear power plant accident triggered by the Great East Japan Earthquake and tsunami on March 11, 2011.

They filed a lawsuit with the Tokyo District Court on Jan. 27, seeking 616 million yen ($5.32 million) in compensation from the plant’s operator.

“We want the court to decide whether our cancer is related to the nuclear plant (accident),” one of the plaintiffs said at a news conference held afterward.

One plaintiff in her 20s said at the news conference that she underwent surgery for thyroid cancer after it was detected in 2016. She said she had landed a job she wanted, but quit it out of consideration for her health.

“I couldn’t tell anyone about my cancer because I was afraid that I might face discrimination,” said the woman. “I decided to speak out for the sake of children suffering under the same circumstances as well.”

The mother of a male plaintiff told the news conference that several companies refused to hire her son after he told them about his cancer during his job search.

According to the lawsuit, two of the plaintiffs had half of their thyroid gland removed, while the other four had the entire gland removed due to the recurrence of the cancer.

“We will sincerely respond to the lawsuit,” said a TEPCO official.

Some 260 people have been diagnosed as having or suspected of having thyroid cancer since the nuclear disaster, according to the prefecture’s survey.

The trial will focus on whether to recognize a causal relationship between the nuclear accident and the development of thyroid cancer.

The government barely mentioned health damage from radiation exposure in its interim guidelines on compensating victims of the nuclear disaster since they were compiled in 2013, when the full extent of the adverse health effects was not available yet.

Cases of thyroid cancer are thought to begin to increase only several years after exposure to radiation.

The government may need to provide redress for thyroid cancer patients under the guidelines depending on the court’s ruling.

Concerns over the health effects from radiation exposure were gradually eased after the prefectural government’s expert panel investigating the nuclear accident concluded in 2019 that cases of thyroid cancer among the residents were not related to their exposure to radiation.

However, problems arising from radiation exposure following the disaster are not limited to health concerns.

Emiri Miura, who heads the Fukushima Child Support Care Center, a Fukushima-based support group for children who experienced the 2011 earthquake and tsunami, said some young residents who are now in their teens to 20s face discrimination and stigma when socializing with friends or getting married.

In one case, the parents of a resident’s partner oppose the couple’s dating even though the resident is not suffering from any negative health effects, according to Miura.

(This article was written by Yuri Murakami and Noriyoshi Ohtsuki, a senior staff writer.)