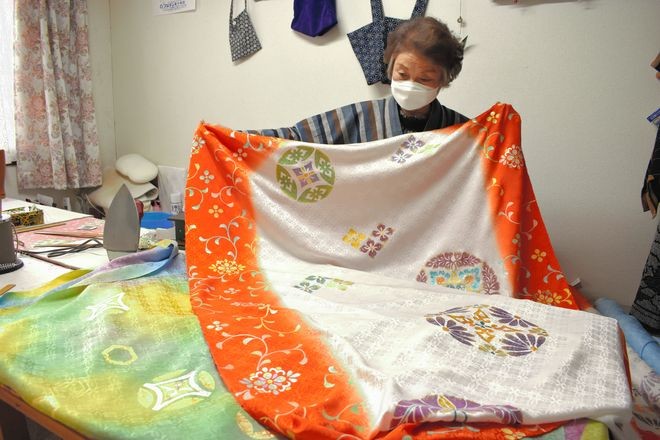 KYOTO--Alarmed at decreasing opportunities to wear kimono in modern Japan, dyers specializing in Kyoto-style "yuzen" techniques are turning their attention to a market steeped in traditional dress: India.

The Kyo-yuzen dyers are using their long-standing techniques to create sari, India's national dress. They are promoting their expertise and seeking to make a foray into Indian markets, which are enjoying a heady economic expansion.

The traditional Japanese designs received a favorable response even from the Indian ambassador to Japan. Now, artisans are conducting market research to cater to local needs and explore sales channels in India.

It is said that the dyeing techniques were pioneered by 17th-century painter Miyazaki Yuzensai.

In particular, "Kyo-tegaki-yuzen" is synonymous with luxury kimono.

It takes at least 15 artisans to make one piece because it is made almost entirely by hand.

With each production process such as planning, design sketching, gluing and brush dyeing undertaken by specialized artisans, some pieces could take more than a year to finish.

In Japan, there has been fewer opportunities for people to wear kimono, leading to dwindling sales.

According to the Federation of Kyo-Yuzen Cooperatives, based in Kyoto's Nakagyo Ward, the annual production has gradually decreased after peaking at 16.52 million "tan" of kimono cloth (enough to make 16.52 million kimono) in fiscal 1971 ending in March 1972.

Emiko Ban, 81, a kimono tailor who cuts bolts of cloth into pieces to make kimono, said she used to receive more orders for long-sleeved "furisode" than she could keep up with at the end of a year.

But now, she barely gets any orders.

The fact that people go out less frequently due to the novel coronavirus pandemic is adding insult to injury.

"It's disastrous. Artisans have nothing to do and are exhausted," said Susumu Takehana, a "sensho" dyeing master in charge of supervising all processes of Kyo-yuzen kimono production, who also serves as president of the cooperative association for Kyo-yuzen dyers based in Nakagyo Ward.

When Takehana and others were in anguish over how they could find a new market, they thought about India, an emerging economy with a population of 1.38 billion.

The sari consists of a piece of cloth 115 centimeters wide and 5 meters long, which is draped around the body.

Meanwhile, kimono is made by cutting a roll of fabric 37 cm wide and about 13 meters long into pieces.

"They are different in size, but the kimono and sari are made from one piece of cloth. We thought we could appeal to wealthy people in India," Takehana said.

However, they had little experience in making saris.

After seeking advice from specialists and receiving subsidies from the prefectural government, the artisans started making saris through trial and error in April 2021.

Takehana and nine other sensho each completed a sari.

One of the designs features an elephant drawn by Ito Jakuchu, while another is inspired by "Red and White Plum Blossoms," a painting on a folding screen by Ogata Korin.

The artisans used a tailor-made silk fabric made using "chirimen" crepe from the Tango region, which is more wrinkle resistant and softer than regular fabrics used for kimono.

The new designs were unveiled during a presentation hosted by the cooperative association on Jan. 18 at the Kyoto Sangyo Kaikan Hall in Shimogyo Ward.

PROMOTING ‘MADE IN JAPAN’

Prior to the presentation, Takehana and other artisans had visited the Indian Embassy in Tokyo's Chiyoda Ward in December last year to promote the Kyo-yuzen sari.

They said the ambassador appeared to be deeply impressed by the beautiful Kyo-yuzen saris made using the traditional techniques.

They have entrusted the saris to a clothing buyer in India to collect feedback from wealthy consumers said to be increasing in number in the country, while doing market research to create a sales channel.

Actually, the number of people wearing saris is said to be declining even in India because Western clothing has become widely adopted as women have more opportunities in society.

Still, it is not uncommon to see women who earn high salaries attending parties wearing a luxury sari costing at least 1 million yen ($8,600).

"There is a market there. We decided to feature traditional Japanese patterns for our latest works to promote the fact that they were made in Japan, but we want to reflect local needs for our products in the future," Takehana added.