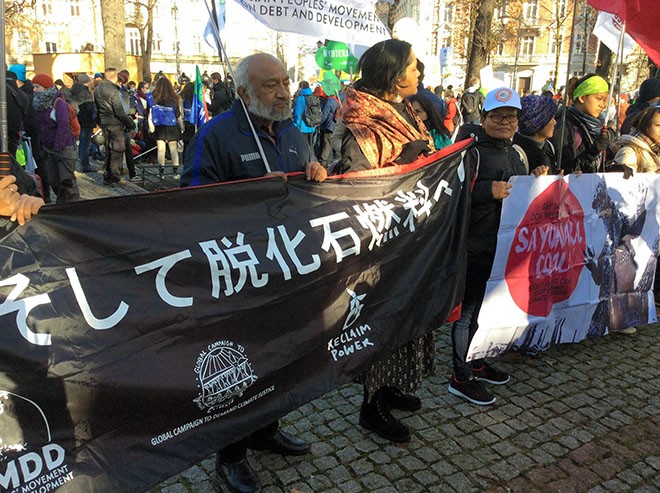 Protesters call for the abolition of coal-fired thermal power and an end to construction of new coal plants in Japan at the COP24 U.N. climate change conference in Katowice, Poland, in December 2018. (Asahi Shimbun file photo)

MUMBAI--Japan should stop funding the construction of a coal-fired power plant in Bangladesh as the emissions it produces will accelerate global warming and put the low-lying country at greater risk of climate-change impacts, youth activists said on Friday.

Japanese trading house Sumitomo Corp, along with Toshiba and IHI Corporation, is building the Matarbari power plant in Maheshkhali near the southeastern coastal town of Cox's Bazar, funded by the Japan International Cooperation Agency (JICA).

Climate campaigners said the project contradicts Japan's commitment, made with other wealthy G7 nations last May, to end funding for "unabated" coal power overseas by the end of 2021.

Coal is considered unabated when it is burned for power or heat without using technology to capture the resulting emissions, a system not yet widely used in power generation.

The power plant under construction at Cox's Bazar, along the world's longest beach, puts the lives and livelihoods of locals at risk and will add to broader climate woes, activists said.

Bangladeshi officials said all possible measures were being taken to reduce the negative consequences of the fossil-fuel power plant.

Kentaro Yamamoto, an activist with student movement Fridays for Future Japan, said international support for such energy infrastructure was being offered to Asian countries as "development assistance" but was "destroying the environment".

Launching a campaign to demand that Sumitomo and JICA stop work on the project, activists and environmental scientists from the region said Japan should stop investing in dirty energy, in order to limit global warming to 1.5 degrees Celsius in line with internationally agreed climate goals.

"This project is hurting the people of Bangladesh and this planet. About 20,000 people will lose land, homes and jobs, flooding will get worse and about 14,000 people could lose their lives due to the toxic waste," Yamamoto told an online event.

The Bangladesh power plant is at odds with global efforts to curb climate change, and Sumitomo's own commitment to become carbon neutral by 2050, activists said.

A spokesman for Sumitomo, which began building Matarbari in 2017, said it was fulfilling its contract, adding the project was not at odds with the firm's own net-zero emissions goal as it would be operated by the Bangladesh government and retired before mid-century.

About 8% of Bangladesh's electricity supply comes from coal.

Last year it cancelled 10 out of 18 coal-fired plants it had planned to set up, amid rising costs for the polluting fuel and growing calls from activists to source more of the nation's power from renewable energy sources.

Mohammad Hossain, head of Power Cell, a technical arm of the Bangladesh energy ministry, said the government had not received a petition from climate activists to stop the Matarbari project.

"We have already cancelled power plants with an intention to cut down emissions but this is an ongoing project and there is no question to cancel it," he told the Thomson Reuters Foundation.

The state-run plant - which is expected to be operational by 2024 - would use new technologies to limit emissions, minimise water intake and reduce fly ash to avoid environmental harm, he added.

"Our country is growing fast - its energy demand is growing. This project has been taken up looking at the demands of 2030," Hossain said.

"We have the capacity to transition to renewable energy and (we) need the support of Japan to make this transition but not for a coal power plant that is aimed at their profit," said Farzana Faruk Jhumu of the Bangladesh arm of Fridays for Future.

JICA did not immediately respond to a request for comment.