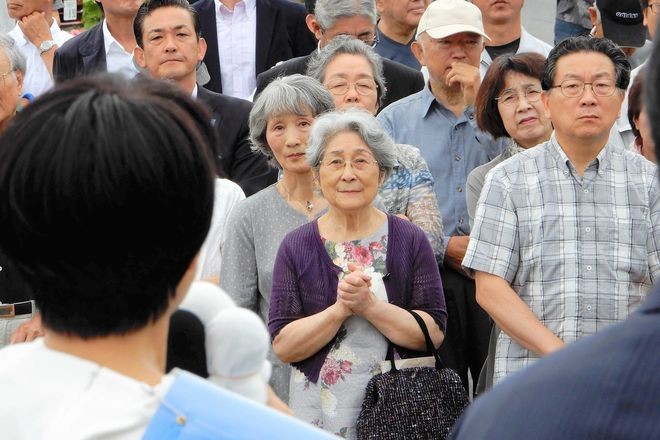 Voters listen to speech by a female candidate for the Upper House election in Akita Prefecture in 2019. (Asahi Shimbun file photo)

The ratios of female members of the Diet and local assemblies in Japan remain dismally low by international norms. Nearly four years have passed since a law came into effect calling for an equitable shift in the status quo, yet no signs of significant change have emerged.

Much of the blame rests with political parties that are not eager to field woman candidates. Social and economic circumstances that discourage women from entering politics need to fundamentally change. One notable, albeit belated, policy initiative concerns a government push to prevent all forms of harassment against women in politics. The campaign by its very nature ought to help achieve that goal.

A revision to the election gender parity law last June requires the central and local governments to establish systems to allow female members of the Diet and local assemblies who are raising children to pursue both political careers and a family life. The revision also urges administrations to offer programs to increase awareness of the problem of harassment and provide counseling to victims.

The central government set up a panel of experts to discuss appropriate measures and started producing video materials on the issue of harassment.

Prior to this, the Cabinet Office conducted a survey of female members of local assemblies across the nation to gauge the extent of harassment they experienced. Of the 1,300 cases reported, 68.4 percent involved power harassment and 22.9 percent constituted various types of sexual harassment. Maternity harassment, an odious form of intimidation targeting pregnant women, accounted for 1.4 percent of the total. The findings underscored afresh the seriousness of this problem.

Of all the cases of harassment involving local assembly female members, voters were the abusers in 53.5 percent. Cases involving other assembly members came to 46.5 percent. One female assembly member said a voter harangued her to go out with him in exchange for his vote. Another reported that her election poster was defaced with obscenities. Yet another said her personal information was disclosed in social media without her authorization. These findings must be taken as a clarion call to change the attitude of voters toward the issue of harassment, just as well as awareness programs for assembly members also need to take root.

A growing number of local administrations are introducing ordinances to prevent harassment by local government employees and assembly members. These progressive actions should inspire similar efforts at both the national and local levels.

The scheduled Upper House election this summer will be the third national poll to be held since the law to promote gender parity went into force. In the Lower House election last autumn, women accounted for 17.7 percent of all candidates, little changed from the previous election for the chamber. A total of 45 women were elected to the house last year, or 9.7 percent of all successful candidates. This gloomy picture of gender disparity in politics demands a determined effort by political parties to rectify the situation ahead of the Upper House election.

Kenta Izumi, the head of the opposition Constitutional Democratic Party of Japan, has pledged to make an all-out effort to ensure women will constitute half of the party’s candidates for the election, including those competing in the proportional representation segment. Women already account for about 65 percent of the Japanese Communist Party’s candidates for the poll. But the ruling Liberal Democratic Party has made no notable move to tackle the problem.

The Asahi Shimbun in an editorial proposed that all parties field equal numbers of male and female candidates for the proportional representation part of the election as one potentially viable idea. The proposal is premised on the fact there are no predetermined positions of candidates on such lists. The order of a party list of candidates depends on the number of votes each individual candidate gets, which probably makes it easier to build party consensus on fielding equal numbers of male and female candidates.

Let us remember that the Diet unanimously passed the bill for gender parity in elections, which was drafted by lawmakers. Parties should not allow the law to remain trapped in the morass of irrelevance.