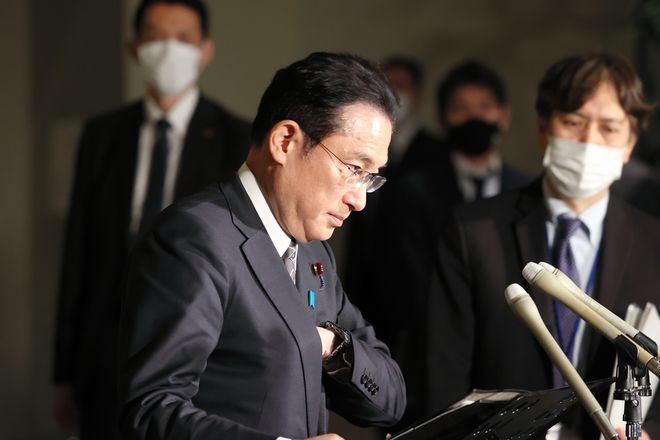 Faced with a Feb. 1 deadline and the prospect of angering South Korea or conservative elements within his own party, Prime Minister Fumio Kishida opted to appease the latter Jan. 28 and nominate ancient gold and silver mines on the island of Sado in Niigata Prefecture, for inclusion in UNESCO’s World Heritage List in 2023.

Had Kishida decided not to risk another row with South Korea, which vehemently objected to the listing, he would have triggered an uproar among traditionalists in the ruling Liberal Democratic Party as well as local officials in Niigata who had clamored for the nomination go forward.

As Kishida was wavering on what course of action to take, he sought counsel from his old buddy Shinzo Abe, a former prime minister who has emerged as a powerful behind-the-scenes political force since he left office in 2020.

In 2015, when Abe was prime minister, the “Sites of the Meiji Industrial Revolution” was designated as a UNESCO World Heritage site. It includes the Hashima Coal Mine on a tiny speck of rock known as “Battleship Island” off the coast of Nagasaki city. Seoul had criticized Japan for not offering a full accounting on the use of forced Korean labor at the site.

Abe reminded Kishida that Park Geun-hye, a conservative, was president of South Korea at the time.

“Still, South Korea made a major fuss, so even if you hold off on a decision now, the result in the end will be the same,” Abe told him.

Seoul, which accuses Japan of not facing up to its excesses during the period when the Korean Peninsula was under colonial rule, argues that Koreans were used by Japan as forced laborers prior to and during World War II. It called on Japan to retract the nomination and vowed to work to block the designation as a World Heritage site.

Emboldened by Abe’s example from 2015 and his latest advice, Kishida decided to set up a task force within the prime minister’s office headed by Shigeki Takizaki, an assistant chief Cabinet secretary, to handle discussions with South Korea over historical issues that continue to bedevil bilateral relations.

While Kishida appears to have appeased conservative elements within the LDP for now, he could still face a domestic backlash if the Sado gold mines do not gain designation due to opposition from South Korea.

This, as sources at the Cultural Affairs Agency noted, is because UNESCO has taken the stance that when a designation is hotly disputed between nations, no action will be taken.