Record quarter of a million virus patients stuck at home 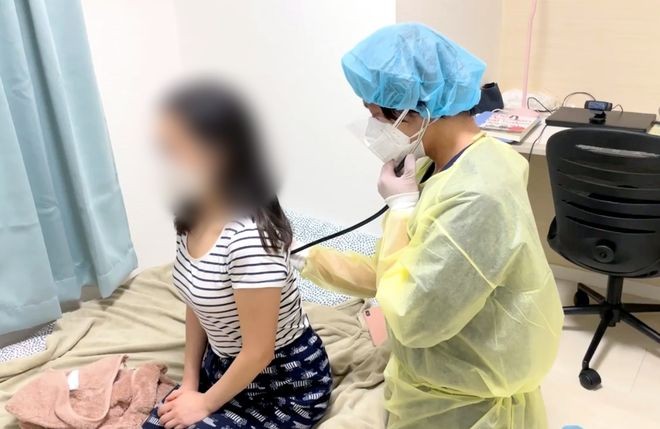 A doctor makes a house call for a Tokyo resident with COVID-19 resting at home. (Provided by Fast Doctor)

More than a quarter million people are recuperating at home with COVID-19, double the figure at the peak of the fifth wave of cases last summer.

The health ministry announced Jan. 28 that a record 264,859 patients around Japan were resting at home after testing positive for the novel coronavirus.

Hospitals were treating about 17,000 COVID-19 patients and 23,000 or so were recuperating in designated lodging facilities as of Jan. 26, it said.

Being forced to stay at home while ill has been “hell” was how a 45-year-old woman in Osaka city who lives with four other family members described her situation. All of them developed fevers over the course of a week.

In mid-January, the woman’s mother, who is in her 70s, developed a fever, and shortly after, the women fell sick, along with her two sons, aged 4 and 11, and her 45-year-old husband.

With all family members running high fevers and complaining of aching joints, it was difficult to even drink liquids, she said.

The woman was in such a bad state she had to lie down due to severe headache while her raging fever kept her awake at nights.

“None of us grown-ups were in a condition to leave the house (to go shopping) and walk about,” the woman said.

Calls to the local public health office never got through, except one, which ended with the person at the other end of the line saying, “Look for a medical institution on your own and go there for a check.”

She tried calling about having meals delivered to their home, if only for her children. But because those calls did not go through, the woman had to continue preparing meals even as she was in no condition to do so.

“Our symptoms might have been minor, but it was still much worse than coming down with influenza or the common cold,” she said.

(This article was written by Hiroshi Ishizuka and Yukiko Nagatomi.)